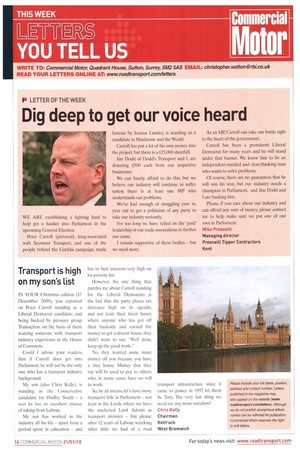 Page 16, 21st January 2010 — Transport is high on my son's List
Close
Noticed an error?
If you've noticed an error in this article please click here to report it so we can fix it.
Keywords : Andrew Adonis, Baron Adonis, Parliament Of Singapore, Politics Of The United Kingdom, British People, Government Of The United Kingdom, Politics, Human Interest

IN YOUR Christmas edition (17 December 2009), you reported on Peter Carroll standing as a Liberal Democrat candidate, and being backed by pressure group Transaction, on the basis of them wanting someone with transport industry experience in the House of Commons.

Could I advise your readers, that if Carroll does get into Parliament, he will not be the only one who has a transport industry background.

My son (also Chris Kelly). is standing as the Conservative candidate for Dudley South — seat he has an excellent chance of taking from Labour.

My son has worked in the industry all his life — apart from a period spent in education — and has its best interests very high on his priority list.

However, the one thing that puzzles me about Carroll standing for the Liberal Democrats is the fact that the party places tax increases high on its agenda, and not least their latest fiasco, where anyone who has got off their backside and earned the money to get a decent house, they didn't want to say: "Well done, keep up the good work."

No, they wanted some more money off you because you have a nice house. Money that they say will be used to pay to others, who, in many cases, have no will to work.

So, by all means, let's have more transport folk in Parliament — not least in the Lords, where we have the unelected Lord Adonis as transport minister — but please, after 12 years of Labour wrecking what little we had of a road transport infrastructure since It came to power in 1997, let them he Tory. The very last thing we need are any more socialists! Chris Kelly Chairman