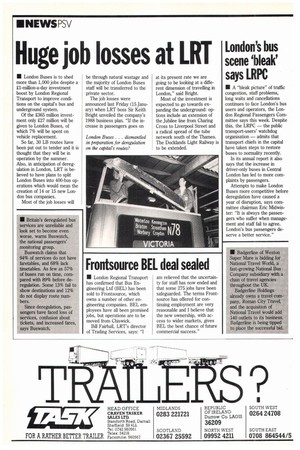 Page 18, 21st January 1988 — Huge job losses at LRT
Close
Noticed an error?
If you've noticed an error in this article please click here to report it so we can fix it.
Keywords : London Regional Transport, London Buses, London, Geography Of Europe, Labor

• London Buses is to shed more than 1,000 jobs despite a £1-million-a-day investment boost by London Regional Transport to improve conditions on the capital's bus and underground system.

Of the £365 million investment only £27 million will be given to London Buses, of which 7% will be spent on vehicle replacement.

So far, 30 LB routes have been put out to tender and it is thought that they will be in operation by the summer. Also, in anticipation of deregulation in London, LRT is believed to have plans to split London Buses into 400-bus operations which would mean the creation of 14 or 15 new London bus companies.

Most of the job losses will be through natural wastage and the majority of London Buses staff will be transferred to the private sector.

The job losses were announced last Friday (15 January) when LRT boss Sir Keith Bright unveiled the company's 1988 business plan. "If the increase in passengers goes on at its present rate we are going to be looking at a different dimension of travelling in London," said Bright.

Most of the investment is expected to go towards expanding the underground: options include an extension of the Jubilee line from Charing Cross to Liverpool Street and a radical spread of the tube network south of the Thames. The DocIdands Light Railway is to be extended.