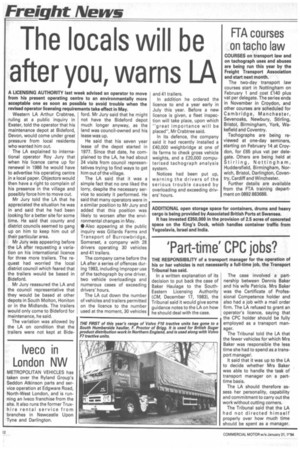 THE RESPONSIBILITY of a transport manager for the operation of his or her vehicles is not necessarily a full-time job, the Transport Tribunal has said.

In a written explanation of its decision to put back the case of Baker Haulage to the SouthEastern Licensing Authority (CM, December 17, 1983), the Tribunal said it would give some guidance notes to the LA on how he should deal with the case. The case involved a partnership between Dennis Baker and his wife Patricia. Mrs Baker was the Certificate of Professional Competence holder and also had a job with a mail order firm. The LA refused to grant an operator's licence, saying that the CPC holder should be fully employed as a transport manager.

The Tribunal told the LA that the fewer vehicles for which Mrs Baker was responsible the less time she had to spend as a transport manager.

It said that it was up to the LA to decide whether Mrs Baker was able to handle the task of transport manager on a parttime basis.

The LA should therefore assess her personality, capability and commitment to carry out the work without cutting corners.

The Tribunal said that the LA had not directed himself properly over how much time should be spent as a manager.