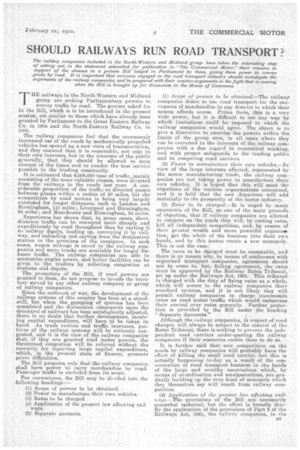 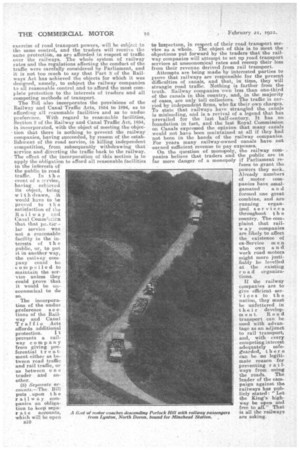 Page 9, 21st February 1922 — SHOULD RAILWAYS RUN ROAD TRANSPORT?
Close
Noticed an error?
If you've noticed an error in this article please click here to report it so we can fix it.

The railWay companies included in the North-Western and Midland group have taken the interesting step of setting out, in the statement submitted for publication in The Commercial Motor," their reasons in support of the clauses in a private Bill lodged in Parliament by them, giving them power to convey goods by road. It is important that everyone engaged in the road transport industry should investigate the arguments of the railway companies, and be prepared with their counter-arguments in the fight that is coming when the Bill is brought up for discussion in the House of Commons.

The railway companies feel that the enormously increased use of the roads by mechanically propelled vehicles has opened up a new vista of transportation, and they contend that it is reasonable, not only in their own interests, but in the interests of the public generally, that they should be allowed to keep abreast of the times and to render the best service possible to the trading community.

It is estimated that 6,000,000 tons of traffic, mainly consisting of the more valuable classes, were diverted from the railways to the roads last year. A considerable proportion of the traffia so diverted passes between places within a radius of 50 miles, but the cempetition by road motors is being very largely extended for longer distances, such as -London and Birmingham, 111 miles • Liverpool and Birmingham, SS miles; and Manchester and Birmingham, 84 miles.

Experience has shown that, in many eases, shortdistance traffic can be conveyed More cheaply and expeditiously by road throughout than by carting it to railway depots, loading up, conveying it by railway, and unloading and carting from the destination station to the premises of the consignee. In such cases, wagon mileage is saved to the railway companies and more trucks are available for longer distance traffic. The railway companies are able to economize engine power, and better facilities can be given to the traders by relieving congestion at stations and depots.

The promoters of the Bill, if road powers are granted to them, do not propose to invade the territory served by any other railway company or group of railway companies.

Since the outbreak of war, the development of the railway systems of this country has been at a standstill, but when the grouping of systems has been completed and the dislocation consequent upon the decontrol of railways has been satisfactorily adjusted, there is no doubt that further development, involving capital expenditure, will have to be taken in hand. As trade revives and traffic increases, portions of thefl railway systems will be seriously congested, and it is the view of the railway companies that, if they are granted road motor powers, the threatened congestion will be relieved without the necessity for incurring large capital expenditure, which, in the present state of finance, presents grave difficulties.

The Bill proposes only that the railway companies shall have power to carry merchandise by road. Passenger traffic is excluded from its scope.

For convenience, the Bill may be divided into the following headings:— (1) Scope of powers to be obtained.

(2) Power to manufacture their own vehicles.

(5) Separate accounts. (1) Scope of powers to be obtained.—The railway companies desire to use road transport for the conveyance of merchandise in any district to which their system affords access. Prima facie, this is a very wide power, but. it is difficult to sec any way by which limitations could be imposed to which the railway companies would agree. The object is to give a discretion to exercise the powers within the limits of the group area, in all cases where they can be exercised in the interests of the railway companies with a due regard to economical working, and with proper safeguards to the trading public and to competing road carriers.

(2) Power to manufacture their own vehicles.—In view of the large interests affected, represented by the motor manufacturing trade, the railway companies are not taking power, to manufacture their own vehicles. It is hoped that this will meet the objections of the various organizations concerned, and -it is held that the new departure will add materially to the prosperity of the motor industry.

(3) Rates to be charged.—It is urged by many opponents of the Bill, as one of the main grounds of objection, that if railway companies are allowed to compete on the roads they will, by cutting rates, kill all independent competition, and, by reason of their greater wealth and more powerful organize tion, get the whole of the 'business into their own hands, and by this means create a new monopoly. This is not the case: The rates to be charged must be reasonable, and there is no reason why, by means of conference with organized transport companies, agreement should not be come to, but, failing agreement, the rates must be approved by the Railway Rates Tribunal, set up under the Railways Act, 1921. This tribunal is charged with the duty of fixing rates as a whole, which will secure to the railway companies their standard revenue, and it is not likely -they will permit railway companies to charge uneconomic rates on road motor traffic which would embarrass their control over rates generally. Further protection is provided by the Bill under the heading " Separate Accounts."

It is further said that new competition on the reads by railway companies will probably have the effect of killing the small road carrier, but this is actually happening to-clay as a, result of the con7 centration of road transport business in the hands of the large and wealthy associations which,, by means of co-ordination and amalgamations, are gradually building up the very -kind of monopoly which they themselves say will result from railway competition. (4) Application of the present law affecting railways.—The provisions of the Bill are necessarily somewhat technical, but the effect is broadly this: By the application of the provisions of Part 3 of the Railways Act, 1921, the railway companies, in the exercise of road transport powers, will he subjezt, to the same control, and the traders will receia e the same protection, as are afforded in re,speet of traffic over the railways. The whole system of railway rates and the regulations affecting the conduct of the traffic were carefully considered by Parliament, and it is not too much to say that Part 3 of the Railways Act has achieved the objects for which it was designed, namely, to subject the railway companies to all reasonable control and to afford the most complete protection to the interests of traders and all competing methods of transport. The Bill also incorporates the provisions of the Railway and Canal Traffic Acts, 1854 to 1894, as to affording all reasonable facilities and as to undue preference. With regard to reasonable facilities, Section 2 of the Railway and Canal Traffic Act, 1854, is incorporated, with the object of meeting the ()Nee' tion that there is nothing to prevent the railway companies, having succeeded, by reason of the establishment of the road service, in killing independent competition, from subsequently withdrawing that service and diverting the traffic back to the railway. The effect of the incorporation of this section is to apply the obligation to afford all reasonable facilities in the interests of the public to road traffic. In t h e event of a cerviee., having . achieved its object, being with drawn, it would have to proved to t h e satisfaction of tle Railway and Canal Commi:eicn that that pa, ticalar service was not a reasonable facility in the interests of t h e public, or, to put it in another way, the railway corn.

any couid be coin polled to maintain the service unless they could prove that it would he uneconomical to do so.

The incorporation of the undue preference s e ctions of the Railway and Canal Traffic Acts affords additional protection. I t prevents a railway company from giving preferential t r eatmerit either as between road traffic and rail traffic, or as between o n trader and another.

sie to inspection in respect of their road transport service as a whole. The object of this is to meet the objections put forward by the traders that the railway companies will attempt to set up road transport services at uneconomical rates and recoup their loss from their revenue derived from rail transport.

Attempts are being made by interested parties to prove that railways are responsible for the present difficulties of canals, and that, in time, they will strangle road traffic. Nothing is farther from the truth. Railway companies own less than one-third of the canals, in this country, and, in the majority of eases, are only toll collectors. The traffic is car ried ried by independent firms, who fix their own charges. To state that railways have strangled the canals is misleading, and is a revival of a legend that his prevailed for the last half-century. It has no foundation in fact, and the last Royal Commission on Canals expressed the opinion that many canals would not have been maintained at all if they had not been in the hands of the railway companies. For years many railway-owned canals have not earned sufficient revenue to pay expenses. On the question of monopoly, the railway companies believe that traders and the public are in far more danger of a monopoly if Parliament refuses to grant the powers they seek. Already numbers of motor companies have amal gamated a n d formed one great combine, and are running organized services throughout t Ii e country. The complaint that railw a y companies are likely to affect the existence of ex-Service m e n who own and work road motors might more justifiably be levelled at the existing road organizations.

If the railway companies are to give efficient services to the nation, they must be unfettered in their develop ment. Road transport can be used with advan tage as an adjunct to rail transport, and, with every competing interest adequately safeguarded, there can be no legiti mate reason for preventing r a i I ways from • using the roads. The leader of the cam paign against the railways has publicly stated: " Let the King's highway be open and free to all" That is all the railways are asking.