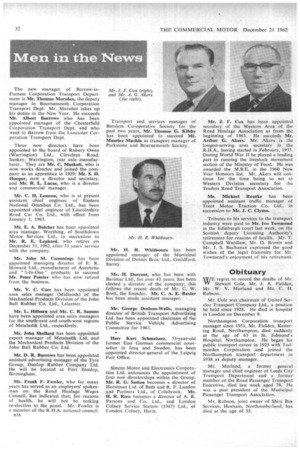 Page 34, 21st December 1962 — The new mana g er of Barrow-inFurness Corporation Transport Department is Mr.
Close
Noticed an error?
If you've noticed an error in this article please click here to report it so we can fix it.
Keywords : Mana, Business / Finance

Three new directors have been appointed to the board of Rubery Owen (Warrington) Ltd., Cleveleys Road, Sankey, Warrington, rear axle manufacturer. They are Mr. C. Muskeft who is now works director and joined the company as an apprentice in 1929; Mr. S. 11. Hooper, now a director and secretary, and Mr. R. L. Lucas, who is a director and commercial manager.

Mr. E. A. Butcher has been appointed area manager, Worthing, of Southdown Motor Services Ltd., in succession to Mr. R. E. Lephard, who retires on December 31, 1962, after 31 years' service with the company.

Mr. John Shellard has been appointed export manager of Metalastik Ltd. and the Mechanical Products Division of the John Bull Rubber Co. Ltd.

Mr. D. R. Burrows has been appointed assistant advertising manager of the Tyre Group, Dunlop Rubber Company Ltd. He will be located at Fort Dunlop, Birmingham.

Mr. Frank F. Fowler, who for many years has served as an employers' spokesman on the Road Haulage Wages Council, has indicated that, for reasons of health, he will not be seeking re-election to the panel. Mr. Fowler is a member of the R.H.A. national council.

Transport and services manager of Burslem Co-operative Society for the past two years, Mr. Thomas G. Kilsby has been appointed to succeed Mr. Maurice Machin as transport manager of Parkstone and Bournemouth Society.

Mr. H. Durrant, who has been with Barimar Ltd., for over 43 years, has been elected a director of the company; this follows the recent death of Mr. C. W. Brett, the founder. Mr. C. A. E. Baxter has been made assistant manager.

Mr. J. F. Cox has been appointed secretary of the Western Area of the Road Haulage Association as from the beginning of 1963. He succeeds Mr. Arthur G. Akers. Mr. Akers is the longest-serving area secretary in the R.H.A., having started in February, 1935. During World War II he played a leading part in running the livestock movement section of the Ministry of Food. He was awarded the M.B.E. in the 1960 New Year Honours list. Mr. Akers will continue for the time being to act 55 Western Division secretary for the Traders Road Transport Association.

Tributes to his services to the transport industry were paid to Mr. Ivo Townsend in the Edinburgh court last week, on the Scottish deputy Licensing Authority's retirement for reasons of health. Mr. T. Campbell Wardlaw, Mr. D. Brown and Mr. I. S. Buchanan expressed the good wishes of the legal fraternity for Mr. Townsend's enjoyment of his retirement.

Mr. Cole was chairman of United Service Transport Company Ltd., a position he held since 1928. He died in hospital in London on December 9.

Mr. Robson, joint owner of Shire Bus Services, Hexharn, Northumberland, has died at the age of 33.