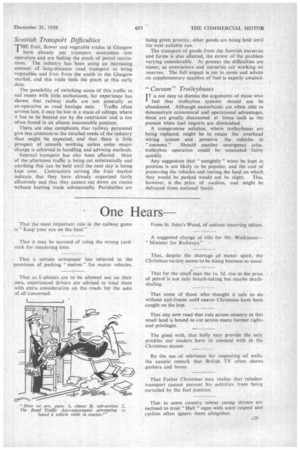 Page 31, 21st December 1956 — One Hears
Close
Noticed an error?
If you've noticed an error in this article please click here to report it so we can fix it.
Keywords : Zoology, Surnames, Watkinson, Reindeer, Father Christmas, Biology, Biota

That the most important rule in the railway game is "Keep your eye on the haul."

That it may be accused of using the wrong yardstick for measuring time.

That a certain newspaper has referred to the provision of parking " metres " for motor vehicles.

That as L-platers are to be allowed out on their own, experienced drivers are advised to treat them with extra consideration on the roads for the sake of all concerned. From St. John's Wood, of sodium incurring odium.

A suggested change of title for Mr. Watkinson" Minister for Railways."

That, despite the shortage of motor spirit, the Christmas variety seems to be doing business as usual.

That for the smadman the Is. 5d. rise in the price of petrol is not only breath-taking but maybe deathdealing.

That some of those who thought it safe to do without anti-freeze until nearer Christmas have been caught on the hop.

That any new road that cuts across country in this small land is bound to cut across many former rights and privileges.

The good wish, that holly may provide the only prickles our readers have to contend with in the Christmas season.

Re the use of television for inspecting oil wells, the caustic remark that British TV often shows gushers and bores.

That Father Christmas may realize that reindeer transport cannot prevent his activities from being curtailed by the fuel position.

cyclists often ignore them altogether. A29