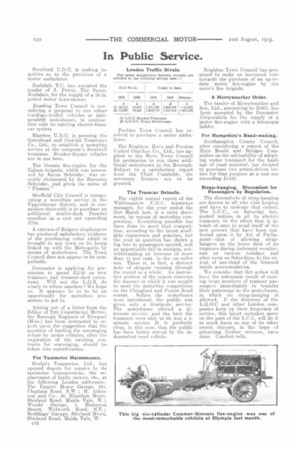 Page 14, 21st August 1913 — In Public Service.
Close
Noticed an error?
If you've noticed an error in this article please click here to report it so we can fix it.
Keywords : Light Rail, Tram, Nottingham, Nottingham Corporation Tramways

Stretford U.D.C. is making inquiries as to the provision of a motor ambulance.

Rochdale T.C. has accepted the tender of J. Petrie, The Baum, Rochdale, for the supply of a 36 in. petrol motor lawn-mower.

Reading Town Council is considering a proposal to run either trackless-trolley vehicles or independent motorbuses, in conjunction with its existing electric-tramcar system Blaydon U.D.C. is pressing the Gateshead and District Tramways Co., Ltd., to establish a motorbus service at the company's Swalwell terminus. Straker-Squire vehicles are in use hero.

The Dennis fire-engine for the Eghana brigade, which was presented by Baron Schroder, was recently christened by the Baroness . Schroder, and given the name of " Phoenix."

Sheffield City Council is inaugurating a motorbus service in the Upperthorpe district, and in connection therewith is to purchase an additional double-deck Daimler omnibus at a cost not exceeding t 750.

A canvass of Reigate shopkeepers lias produced satisfactory evidence of the purchasing value which is brought to any town on its being linked up with the Metropolis by means of motorbuses. The Town Council does not appear to be sympathetic.

Doncaster is applying for permission to spend E5750 on new tramcars and tramear-shed extensions. Will not the L.G.B. do wisely to refuse sanction ? We hope so. It appears to its to be an opportunity for motorbus promoters to get in.

Arising out of a letter from the Editor of THE COMMERCIAL MOTOR, the Borough Engineer of Newport (Mon.) has been instructed to report upon the suggestion that the question of hauling the scavenging refuse by motor vehicles, after the expiration of the existing contracts for scavenging, should be taken into consideration.

The latest comparisons between receipts are afforded by the f ol owing tabular data Peebles Town Council has resolved to purchase a motor ambulance.

The Brighton, Hove and Preston United Omnibus Co., Ltd., has applied to the Hove Town Council for permission to run three additional motorbuses in the Borough. Subject to a satisfactory report from the Chief Constable, the necessary licences are to be granted.

The eighth annual report of the Walthamstaw U.D.C. tramways manager, for the year ended the 31st March Last. is a sorry document, by reason of motorbus competition. Everything possible has been done to meet that competition, according to the latest available experience and practice, but the year in question has shown a big loss in passengers carried, and an appreciable fall in receipts, notwithstanding an increase of more than 15 per cent. in the car-miles run. There is, in fact, a distinct note of despair running through the report as a whole. An instructive portion of the report concerns the manner in which it was sought to meet the motorbus competition on the Chingford and Forest Road routes. Before the motorbuses were introduced, the public was given only a 10-minute service. The motorbuses offered a minute service, service, and the best the tramcars were able to do was a 5minute service. It is perfectly clear, in this case, that the public has bee,' better served by the independent road vehicle.

Brighton Town Council has promised to make an increased vote towards the purchase of an up-todate motor fire-engine by the town's fire brigade.

The tender of Merryweather and Son, Ltd., amounting to 21607, has been accepted by the Doncaster Corporation for the supply of a motor fire-engine with a telescopic ladder.

Southampton County Council, after considering a report of the Main Roads and Bridges Committee on the advisability of adopting motor transport for the haulage of road material, has decided to purchase two petrol-driven lorries for that purpose at a cost not exceeding £1130.

Strap-hanging. Discomfort for Passengers by Regulation.

The discomforts of strap-hanging are known to all who visit London and have, to undergo that ordeal. The L.C.C., on Saturday last, posted notices in all its electric tramcars, to the effect that it intends at once to avail itself of the new powers that have been conferred upon it by Act of Parliament—that of allowing straphangers on the lower deck of its tramcars during inclement weather, and on various holidays and after noon on Saturdays, to the extent of one-third of the licensed inside accommodation.

We &insider that this action will have the automatic result of cau8ing huge numbers of tramcar passengers immediately to transfer their patronage to the motorbuses, in which no strap-hanging is allowed. If the directors of the L.G.O.0 and other London com• panies keep up their frequency of service, this latest mistaken move on the part of the L.C.C. will do it as much harm as any of its other recent changes, in the hope of attracting further revenue, have done. Comfort tells..