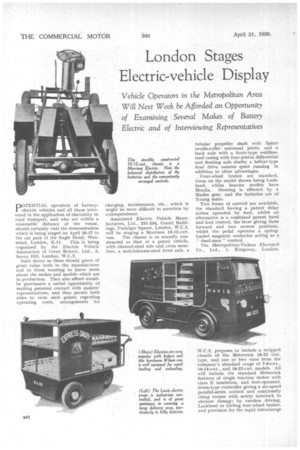 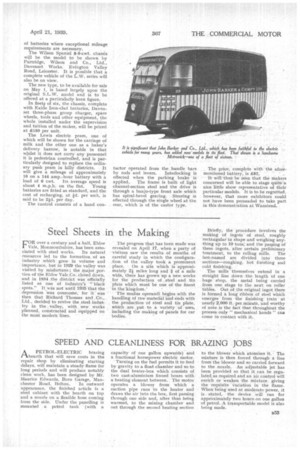 Page 88, 21st April 1939 — London Stages Electric-vehicle Display
Close
Noticed an error?
If you've noticed an error in this article please click here to report it so we can fix it.

POTENTIAL operators of batteryelectric vehicles and all those interested in the application of electricity to road transport, and who are within a reasonable distance of the venue, should certainly visit the demonstration which is being staged on April 25-27 in the car park of the Eagle Hotel, Wan

stead, London, E.11. This is being organized by the Electric Vehicle Association of Great Britain, Ltd., 2, Savoy Hill, London, W.C.2.

Such shows as these should prove of great value both to the manufacturer and to those wanting to know more about the makes and models which are in production. They also afford wouldhe purchasers a useful opportunity of making personal contact with makers' representatives, and thus permit both sides to raise such points regarding operating costs, arrangements for charging, maintenance, etc., which it might be more difficult to ascertain by correspondence.

Associated Electric Vehicle Manufacturers, Ltd., 231-234, Grand Buildings, Trafalgar Square, London, W.C.2, will be staging a Morrison 10-12-cwt. van. The chassis is as soundly constructed as that of a petrol vehicle, with channel-steel side and cross members, a molybdenum-steel front axle, a tubular propeller shaft with Spicer needle-roller universal joints, and a back axle with a Scott-type weldlesssteel casing with four-pinion differential and .floating axle shafts; a helical-type final drive ensures quiet running in addition to other advantages.

Four-wheel brakes are standard, those on the model shown being Lockheed, whilst heavier models have Bendix, Steering is effected by a Marles gear, and the batteries are of Young make.

Two forms of control are available, the standard having a patent delay action operated by foot, whilst an alternative is a combined patent hand and foot control, the lever giving three forward and two reverse positions, whilst the pedal operates a springloaded magnetic contactor acting as a " dead-man " control. • The Metropolitan-Vickers Electrical Co., Ltd., 1, Kingsway, London, W.C.2, proposes to include a stripped chassis of. the Metrovick 18-22 ewt. type, and one or two vans from the company's standard range of 7-9-cwt., 10-14-cwt., and 18-22-cwt. models. All will include the standard Metrovick features of single traction motor with class B insulation, and foot-operated, drum-type controller giving a six-speed parallel-series control and continually rising torque with safety interlock to obviate darnav by careless driving. Lockheed or Girling four-wheel brakes, and provision for the rapid interchange of batteries where exceptional mileage requirements are necessary.

The Wilson Spaniel 8-9-cwt. chassis will be the model to be shown by Partridge, Wilson and Co., Ltd., Davenset Works. Evington Valley Road, Leicester. It is possible that a complete vehicle of the L.W. series will also be on view.

The new type, to be available for sale on May 1, is based largely upon the original S.L.W. model and is to be offered at a particularly keen figure.

In fleet p of six, the chassis, complete with Exide Iron-clad batteries, Davenset three-phase group charger, spare wheels, tools and other equipment, the whole installed under the supervision and tuition of the maker, will be priced at £150 per unit.

The Lewis electric pram, one of which will be shown for the carriage of milk and the other one as a baker's delivery barrow, is notable in that whilst it does not carry any personnel it is pedestrian controlled, and is particularly designed to replace the ordin ary push pram in hilly districts. It will give a mileage of approximately 10 on a 144 amp.-hour battery with a load of 6 cwt. Its average speed is about 4 m.p.h. on the flat. Young batteries are fitted as standard, and the cost of recharging, at fd. per unit, is said to be 20. per day.

The control consists of a hand con

tactor operated from the handle bars

by rods and levers. Interlocking is effected when the parking brake is applied. The frame is built of light channel-section steel and the drive is through a banjo-type front axle which has spiral-bevel gearing. Steering IS effected through the single wheel at the rear, which is of the castor type. The price, complete with the. aforementioned battery, is £82,.

It will thus be 'seen that the makers concerned will be able to stage quite a nice little show representative of their particular models. It is to be regretted, however, that snore exhibitors could not have been persuaded to take part in this demonstration at Wanstead.