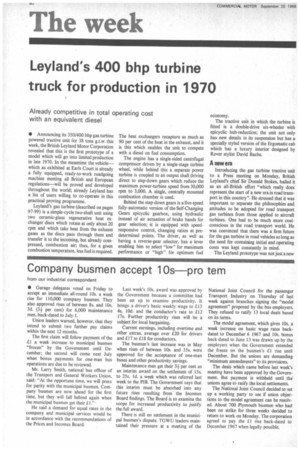 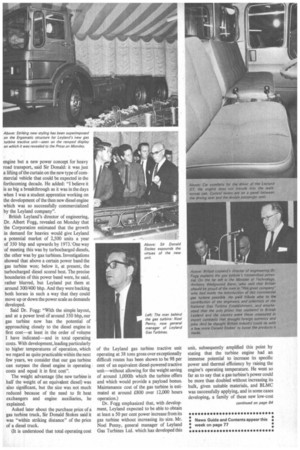 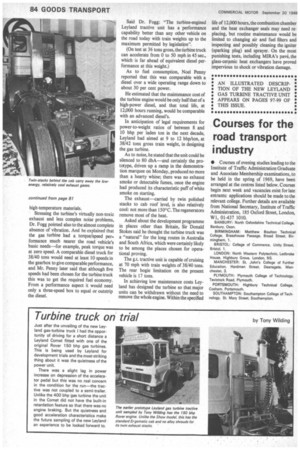 Already competitive in total operating cost with an equivalent diesel

• Announcing its 350/400 bhp gas turbine powered tractive unit for 38 tons g.t.w. this week, the British Leyland Motor Corporation revealed that this is the first prototype of a model which will go into limited production in late 1970. In the meantime the vehicle— which as exhibited at Earls Court is already a fully equipped, ready-to-work roadgoing machine meeting all British and European regulations—will be proved and developed throughout the world; already Leyland has a list of users willing to co-operate in this practical proving programme.

Leyland's gas turbine (described on pages 97-99) is a simple-cycle two-shaft unit using two ceramic-glass regenerative heat exchanger discs which rotate at only about 20 rpm and which take heat from the exhaust gases as the discs pass through them and transfer it to the incoming, but already compressed, combustion air; thus, for a given combustion temperature, less fuel is required. The heat exchangers recapture as much as 90 per cent of the heat in the exhaust, and it is this which enables the unit to compete with a diesel on fuel consumption.

The engine has a single-sided centrifugal compressor driven by a single-stage turbine wheel, while behind this a separate power turbine is coupled to an output shaft driving direct to step-down gears which reduce the maximum power-turbine speed from 30,000 rpm to 3,000. A single, centrally mounted combustion chamber is used.

Behind the step-down gears is a five-speed fully-automatic version of the Self-Changing Gears epicyclic gearbox, using hydraulic instead of air actuation of brake bands for gear selection; it is equipped with speedresponsive control, changing ratios at predetermined points. The driver, as well as having a reverse-gear selector, has a lever enabling him to select "low" for maximum performance or "high" for optimum fuel economy.

The tractive unit in which the turbine is fitted is a double-drive six-wheeler with epicyclic hub-reduction; the unit not only has new details in its suspension but has a specially styled version of the Ergomatic cab which has a luxury interior designed by Rover stylist David Bache.

Introducing the gas turbine tractive unit to a Press meeting on Monday, British Leyland's chief Sir Donald Stokes, hailed it as an all-British effort "which really does represent the start of a new era in road transport in this country". He stressed that it was important to separate the philosophies and attitudes to be adopted for road transport gas turbines from those applied to aircraft turbines. One had to be much more costconscious in the road transport world. He was convinced that there was a firm future for the gas turbine in road vehicles so long as the need for containing initial and operating costs was kept constantly in mind.

The Leyland prototype was not just anew engine but a new power concept for heavy road transport, said Sir Donald: it was just a lifting of the curtain on the new type of com mercial vehicle that could be expected in the forthcoming decade. He added: "I believe it is as big a breakthrough as it was in the days when I was a student apprentice working on the development of the then new diesel engine which was so successfully commercialized by the Leyland company".

British Leyland's director of engineering, Dr. Albert Fogg, revealed on Monday that the Corporation estimated that the growth in demand for heavies would give Leyland a potential market of 2,500 units a year of 350 bhp and upwards by 1973. One way of meeting this was by turbocharged diesels, the other was by gas turbines. Investigations showed that above a certain power band the gas turbine won; below it, at present, the turbocharged diesel scored best. The precise boundaries of this power band were, he said, rather blurred, but Leyland put them at around 300/400 bhp. And they were backing both horses in such a way that they could move up or down the power scale as demands developed.

Said Dr. Fogg: -With the simple layout, and at a power level of around 350 bhp, our gas turbine now has the potential of approaching closely to the diesel engine in first cost—at least in the order of volume I have indicated—and in total operating costs. With development, leading particularly to higher temperatures of operation, which we regard as quite practicable within the next few years, we consider that our gas turbine can surpass the diesel engine in operating costs and equal it in first cost".

The weight advantage (the new turbine is half the weight of an equivalent diesel) was also significant, but the size was not much reduced because of the need to fit heat exchangers and engine auxiliaries, he explained.

Asked later about the purchase price of a gas turbine truck, Sir Donald Stokes said it was "within striking distance" of the price of a diesel truck.

(It is understood that total operating cost of the Leyland gas turbine tractive unit operating at 38 tons gross over exceptionally difficult routes has been shown to be 98 per cent of an equivalent diesel-powered tractive unit—without allowing for the weight saving of around 1,000lb which the turbine offers and which would provide a payload bonus. Maintenance cost of the gas turbine is estimated at around £800 over 12,000 hours operation.) Dr. Fogg emphasized that, with develop ment, Leyland expected to be able to obtain at least a 50 per cent power increase from its gas turbine without increasing its size. Mr. Noel Penny, general manager of Leyland Gas Turbines Ltd. which has developed this unit, subsequently amplified this point by stating that the turbine engine had an immense potential to increase its specific power and thermal efficiency by raising the engine's operating temperature. He went so far as to say that a gas turbine's power could be more than doubled without increasing its bulk, given suitable materials, and BLMC was successfully applying, and in some cases developing, a family of these new low-cost high-temperature materials.

Stressing the turbine's virtually non-toxic exhaust and less complex noise problems, Dr. Fogg pointed also to the almost complete absence of vibration. And he explained that the gas turbine had a torque/speed per. formance much nearer the road vehicle's basic needs—for example, peak torque was at zero speed. A comparable diesel truck for 38/40 tons would need at least 10 speeds in the gearbox to give comparable performance, and Mr. Penny later said that although five speeds had been chosen for the turbine truck this was to get the required fuel economy. From a performance aspect it would need only a three-speed box to equal or outstrip the diesel. Said Dr. Fogg: "The turbine-engined Leyland tractive unit has a performance capability better than any other vehicle on the road today with train weights up to the maximum permitted by legislation".

(On test at 36 tons gross, the turbine truck can accelerate from 0 to 50 mph in 45 sec., which is far ahead of equivalent diesel performance at this weight.) As to fuel consumption, Noel Penny reported that this was comparable with a diesel over a wide operating range down to about 30 per cent power.

He estimated that the maintenance cost of the turbine engine would be only half that of a high-power diesel, and that total life, at 12,000 hours running, would be comparable with an advanced diesel's.

In anticipation of legal requirements for power-to-weight ratios of between 8 and 10 bhp per laden ton in the next decade, Leyland had aimed at 9 to 12 bhp/ton, at 38/42 tons gross train weight, in designing the gas turbine.

As to noise, he stated that the unit could be silenced to 80 dbA—and certainly the prototype, driven up a ramp in the demonstration marquee on Monday, produced no more than a hearty whine; there was no exhaust smoke or detectable fumes, once the engine had produced its characteristic puff of white smoke on starting.

The exhaust—carried by twin polished stacks to cab roof level, is also relatively cool: not more than 150°C. The regenerators remove most of the heat.

Asked about the development programme in places other than Britain, Sir Donald Stokes said he thought the turbine truck was a "natural" for the long routes in Australia and South Africa, which were certainly likely to be among the places chosen for operational proving.

The g.t. tractive unit is capable of cruising at 70 mph with train weights of 38/40 tons. The rear bogie limitation on the present vehicle is 17 tons.

In achieving low maintenance costs Leyland has designed the turbine so that major units can be withdrawn without the need to remove the whole engine. Within the specified life of 12,000 hours, the combustion chamber and the heat exchanger seals may need replacing, but routine maintenance would be limited to changing air and fuel filters and inspecting and possibly cleaning the igniter (sparking plug) and sprayer. On the most punishing tests, including MIRA's pave, the glass-ceramic heat exchangers have proved impervious to shock or vibration damage.