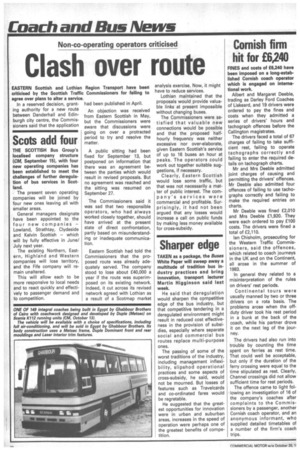 Page 28, 20th October 1984 — Cornish firm hit for £6,240
Close
Noticed an error?
If you've noticed an error in this article please click here to report it so we can fix it.
Keywords : Tachograph, Law / Crime

FINES and costs of 0,240 have been imposed on a long-established Cornish coach operator which is engaged on international work.

Albert and Margaret Deeble, trading as Darley Ford Coaches of Liskeard, and 19 drivers were ordered to pay the fines and costs when they admitted a series of drivers' hours and tachograph offences before the Callington magistrates.

The drivers faced a total of 67 charges of failing to take sufficient rest, failing to operate tachographs correctly and failing to enter the required details on tachograph charts.

Mr and Mrs Deeble admitted joint charges of causing and permitting the drivers' offences. Mr Deeble also admitted four offences of failing to use tachographs correctly and failing to make the required entries on charts.

Ian Chisholm, prosecuting for the Western Traffic Commissioners, said the offences, which related to coach journeys in the UK and on the Continent, all arose in the summer of 1983.

In general they related to a misinterpretation of the rules on drivers' rest periods.

Continental tours were usually manned by two or three drivers on a rota basis. The problems arose when the offduty driver took his rest period in a bunk at the back of the coach, while his partner drove it on the next leg of the journey.

The drivers had also run into trouble by counting the time spent on ferries as rest time. That could well be acceptable, but only if the duration of the ferry crossing were equal to the time stipulated as rest. Clearly, Channel crossings did not allow sufficient time for rest periods.

The offence came to light following an investigation of 16 of the company's coaches after complaints to the Commissioners by a passenger, another Cornish coach operator, and an anonymous informant, who supplied detailed timetables oi a number of the firm's coach trips.