'TELL THE COUNTRY ABOUT TRANSPORT FOLLIES' 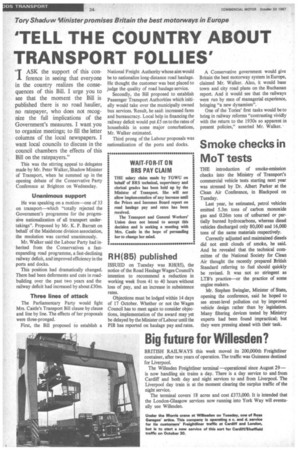 Page 36, 20th October 1967 — 'TELL THE COUNTRY ABOUT TRANSPORT FOLLIES'
Close
Noticed an error?
If you've noticed an error in this article please click here to report it so we can fix it.
Keywords : Haulage, Labour Party, Nationalization, Politics

,T ASK the support of this con

ference in seeing that everyone in the country realizes the consequences of this Bill. I urge you to see that the moment the Bill is published there is no road haulier, no ratepayer, who does not recognize the full implications of the Government's measures. I want you to organize meetings; to fill the letter columns of the local newspapers. I want local councils to discuss in the council chambers the effects of this Bill on the ratepayers."

This was the stirring appeal to delegates made by Mr. Peter Walker, Shadow Minister of Transport, when he summed up in the opening debate of the Conservative Party Conference at Brighton on Wednesday.

Unanimous support He was speaking on a motion—one of 33 on transport—which "totally rejected the Government's programme for the progressive nationalization of all transport undertakings". Proposed by Mr. K. P. Barratt on behalf of the Maidstone division association, the resolution was carried unanimously.

Mr. Walker said the Labour Party had inherited from the Conservatives a fastexpanding road programme, a fast-declining railway deficit, and improved efficiency in the ports and docks.

This position had dramatically changed. There had been deferments and cuts in roadbuilding over the past two years and the railway deficit had increased by about £30m.

Three lines of attack The Parliamentary Party would fight Mrs. Castle's Transport Bill clause by clause and line by line. The effects of her proposals were three-pronged.

First, the Bill proposed to establish a National Freight Authority whose aim would be to nationalize long-distance road haulage. He thought the customer was best placed to judge the quality of road haulage service.

Secondly, the Bill proposed to establish Passenger Transport Authorities which initially would take over the municipally owned bus services. Result, he said: increased fares and bureaucracy. Local help in financing the railway deficit would put £5 on to the rates of households in some major conurbations, Mr. Walker estimated.

Third prong of the Labour proposals was nationalization of the ports and docks. A Conservative government would give Britain the best motorway system in Europe, claimed Mr. Walker. Also, it would base town and city road plans on the Buchanan report. And it would see that the railways were run by men of managerial experience, bringing "a new dynamism".

One of the Tories' first tasks would be to bring in railway reforms "contrasting vividly with the return to the 1930s so apparent in present policies," asserted Mr. Walker.