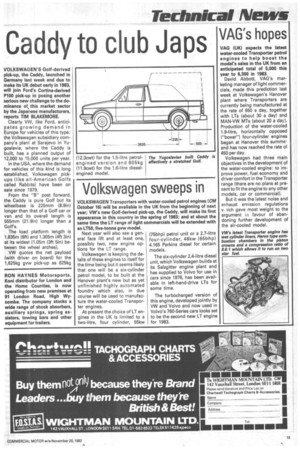 VOLKSWAGEN'S Golf-derived pick-up, the Caddy, launched in Germany last week and due to make its UK debut early in 1983, will join Ford's Cortina-derived P100 pick-up in posing another serious new challenge to the dominance of,this market sector by the Japanese manufacturers, reports TIM BLAKEMORE.

Clearly VW, like Ford, anticipates growing demand in Europe for vehicles of this type: the Volkswagen subsidiary company's plant at Sarajevo in Yugoslavia, where the Caddy is built, has a planned output of 12,000 to 15,000 units per year.

In the USA, where the demand for vehicles of this kind is long established, Volkswagen pickups (like all-American Golfs called Rabbits) have been on sale since 1979.