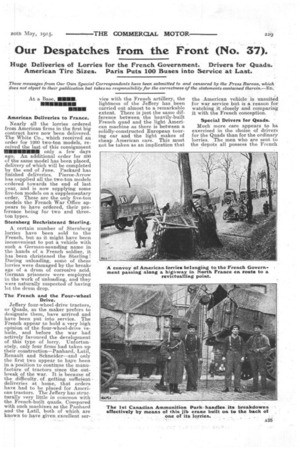 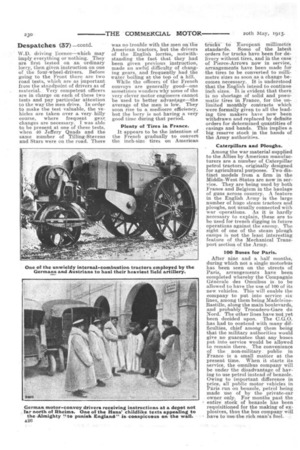 Page 5, 20th May 1915 — Our Despatches from the Front (No. 57).
Close
Noticed an error?
If you've noticed an error in this article please click here to report it so we can fix it.
Keywords : Technology, Agricultural Machinery, Mechanical Engineering, Engineering, Tractors, Tire, Traction Engine, Panhard, Truck, Four-wheel Drive

These messages from Our Own Special Correspondents have been submitted to and censored by the Press Bureau, which does not object to their publication but takes no responsibility for the correctness of the statements contamed therein.—ED.• American Deliveries to France.

Nearly all the lorries ordered from American firms in the first bi contract have now been deliverecL The White Co., which received an order for 1200 two-ton models, received the last of this consignment 11•1111111.rn only a few days ago. An additional order for 400 of the same model has been placed, delivery of which will be completed by the end of June. Packard has finished deliveries. Pierce-Arrow has supplied all the two-ton models ordered towards the end of last year, and is now supplying some fiye-ton models on a supplementary order. These are the only five-ton models the French War Office appears to have ordered, their preference being for two and threeton types.

A certain number of Sternberg lorries have been .sold to the French, but as it might have been inconvenient to put a vehicle with such a German-sounding name in the hands of a French ,soldier, it has been christened the Sterling ! During unloading, some of these lorries were damaged by the break-i age of a drum of corrosive acid. German prisoners were employed in the work of unloading, and they were naturally suspected of having let the drum drop.

The French and the Four-wheel Drive.

Jeffery four-wheel-drive tractors, or Quads, as the maker prefers to designate them, have arrived and have been put into service. The French appear to hold a very high opinion of the four-wheel-drive vehicle, and before the war had actively favoured the develo,pment of . this type of lorry. Unfortunately, only four firms had taken up their construction—Panhard, Renault and Schneider—and only the first two appear to haye been in a position to continue the manufacture of tractors since the outbreak of the war. It is because of the diffickilty., of, getting sufficient deliveries at home, that orders have had to be placed far American tractors. The Jeffery has structurally very little in common with the French-built quads. Compared with such machines as the Panhard and the Latil, bath of which are known to have given excellent ser vice with the French artillery, the lightness of the Jeffery has been carried out almost to a remarkable extent. There is just the same difference between the heavily-built French quad and the light American machine as there is between a solidly-constructed European touring car and the light makes of cheap American cars. This must not be taken as an implication that

the American vehicle is unsuitd for war service but is a reason for watching it closely and comparing it with the French conception.

Much more care appears to be exercised in the choice of drivers for the Quads than for the ordinary lorries. The men who are sent to the depots all possess the French

W.D. driving licence—which may imply everything or nothing. They are first tested on an. ordinary lorry, then given instruction on one of the four-wheel-drivers. Before going to the Front there are two road tests, which are as important from the standpoint of drivers as of material. Very competent officers are in charge on each of these two tests and pay particular attention to the way the men drive. In order to make the test valuable, the vehicles are taken over a very hilly course, where frequent gear changes are necessary. I was able to be present at one of these tests, when 40 Jeffery Quads and the Game number of Tilling-Stevens and Stars were on the road. There was no trouble with the men obthe American tractors, but the drivers of the English lorries, notwithstanding the fact that they had been given previous instruction, made an awful difficulty of changing gears, and frequently had the water boiling at the top of a hill. While the officers of the French convoys are generally good—one sometimes wonders why some of the very clever motor engineers cannot be used to better advantage—the average of the men is low. They soon rise to a, mediocre efficiency, but the lorry is not having a very good time during that period.

Plenty of Tires in France.

trucksto European millimetre standards. Some of the latest orders for trucks have been for delivery without tires, and in the case of Pierce-Arrows now in service, arrangements have been made for the tires to be converted to millimetre sizes as soon as a change becomes necessary. It is understood that the English intend to continue inch sizes. It is evident that there is no shortage of solid and pneumatic tires in France, for the unlimited monthly contracts which were formally given to all the leading tire makers have now been withdrawn and replaced by definite orders for determined quantities of casings and bands. This implies a. big reserve stock in the hands of the Army authorities.

Among the war material supplied to the Allies by American manufacturers are a number of Caterpillar petrol tractors, originally designed. for agricultural purposes. Two distinct models from a firm in the Middle-West States are now in service. They are being used by both France and Belgium in the haulage of guns across country. A feature in the English Army is the large number of huge steam tractors and ploughs, not usually connected with war operations. As it is hardly necessary to explain, these are to be used for trench digging in future operations against the enemy. The sight of one of the steam plough camps is not the least interesting feature of the Mechanical Transport section of the Army.

After nine and a half months, during which not a single motorbus has been seen on the streets of Paris, arrangements have been completed whereby the Compagnie Generale des Omnibus is . to be allowed to have the use of 100 of its new. vehicles. This will enable the company to put into service six lines, among them being MadeleineBastille, along the main boulevards, and probably Troeadero-Gare du Nord. The other lines have not yet been decided upon. The C.G.O. has had to contend with many difficulties, chief among them being that the military authorities would give no guarantee that any buses put into service would be allowed to remain there. The convenience of the non-military . public in France is a small matter at the present time. When it starts its service, the omnibus company will he under the disadvantage of having to use petrol instead of benzole. Owing to important difference in price, all 'public motor vehicles in Paris run on berizoie, petrol being made use of by the private-car owner only. For months past the entire stoek of benzoie has been requisitioned for the making of explosives, thus the bus company will have to use-the rich Inan's fuel.