THE REASON FOR SIX OR MORE WHEELS. 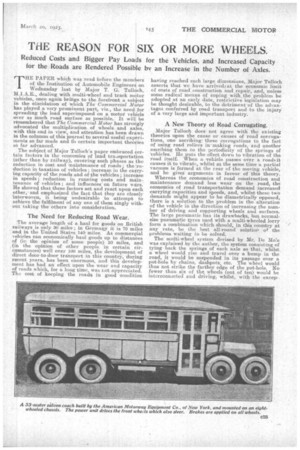 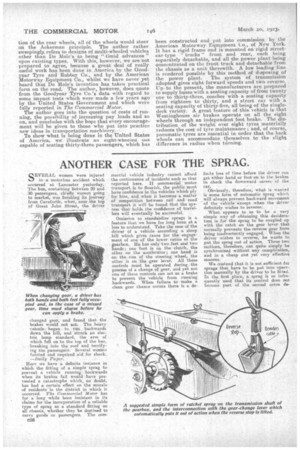 Page 27, 20th March 1923 — THE REASON FOR SIX OR MORE WHEELS.
Close
Noticed an error?
If you've noticed an error in this article please click here to report it so we can fix it.
Keywords : Axle, Wheel, Tire, Bicycle, Engineering Vehicles, Semi-trailer Truck

Reduced Costs and Bigger Pay Loads for the Vehicles, and Increased Capacity for the Roads are Rendered Possible by an Increase in the Number of Axles.

THE PAPER which wap read before the members of the Institution of Automobile Engineers on Wednesday last by Major T. G. -TuHoch, M.I.A.E.,. dealing with multi-wheel and track motor vehicles, once again brings to the forefront a subject in the elucidation of which The Commercial Motor has played a very prominent part, viz., the need for spreading the load superimposed on a motor vehicle over as much road surface as possible. It will be remembered that The Commercial Motor has strongly advocated the multiplication of wheels and axles, with this end in view, and attention has been drawn in the columns of this journal to several useful experiinents so far made and es) certain important theories so far advanced.

The subject of 'Major Tulloch's paper embraced Certain factors in the economies of land traasportation (other than by railway), covering such phases as the reduction in cost and maintenance of roads,. the reduction in taxation of vehicles ; increase in the carrying capacity of the roads and of the vehicles; increase in speeds ; reduction in running costs and maintenance of vehicles ; and influences on future wars. He showed that these factors act and react upon each other, and emphasized the fact that they are closely interwoven, it being undesirable to Attempt to achieve the fulfilment of any one Of them singly without taking the others into consideration.

The Need for Reducing Road Wear.

The average length of a haul for goods on British railways is only 30 miles ; in German* it is 70 miles and in the United States 14G miles. As commercial vehicles can economically haul goods up to distances of (in the opinion of some people) 60 miles, and , (in the opinion of other people in certain circumstances) well over 100 miles, the development of direct door-to-door transport in this country, during recent years, has been enormous, and this development has had an effect upon the wear and capacity of roads which, for a long time, was not.apprecia,ted. The cost of keeping the roadsl, in good condition

having reached such large dimensions, Major Tulloch asserts that we have arrivedt at the economic limit of costs of road construction and repair, and, unless some radical means of coping with the Problem be adopted at an ea-rly date, restrictive legislation may he thought desirable, to the detriment of the advantages conferred by road transport and to the injury. of a very large and important industry.

A New Theory of Road Corrugating.

Major Tulloeh does not agree with the existing theories upon the cause or causes of road corrugations, one ascribing these corrugations to the fact of using road rollers in'makinF roads, and another ascribing them to the periodicity of the springs of vehicles. He puts the effect down to vibration of the road itself. When a -vehicle passes over a roathit causes it to vibrate, whilst at the same time a partial vacuum is formed at the rear of the moving vehicle, and he giaeS arguments in favour of this theory.

Whereas the economics of road construction and maintenance demand less wear on the road, the economies of road transportation demand increased carrying capacities and speeds, and, whilst these two demands might appear to be diametrically opposed, there is a solution to the problem in the alteration of the vehicle in the direction of increasing the number of driving and supporting wheels and surfaces. The large pneumatic has its drawbacks, but normalsize pneumatic tyres used with a multi-wheeled lorry form a combination which should, in this country at any rate, be the best all-round solution of the problems waiting to be solved.

The multi-wheel system devised by Mr. De Mole was explained by the author, the system consisting of tying back the springs of each axle so that, whilst a wheel would rise and travel over a bump in the road, it would be suspended in its passage over a, pot-hole by chains, dashpots, etc. The wheel would thus not strike the farther edge of the pot-hole. No fewer than six of the wheels (out of ten) would be interconnected and driving, whilst, with the excep

tion of the rear wheels, all of the wheels would steer on the Ackerman principle. The author rather sweepingly, refers to designs of multi-wheeled vehicles other than De Mole's as being "'timid advances" upon existing types. With this however, we are not

• prepared to agree, because a great deal of really useful work has been done in America by the Goodyear Tyre and Rubber Co., and by the American Motorway Equipment Co., whilst we have never yet heard that De Mole's invention has taken practical form on the road. The author, however' does quote from the Goodyear Tyre Co.'s data with regard to some impact tests which were made a few years ago by the United States Government and which were fully reported in The Commercial Motor.

The author goes into the question of costs of running, the possibility of increasing pay loads and so on, and concludes with the hope that every encouragement will he given to those who put into practice new ideas in transportation machinery.

To show what is being done in the United States of America, we illustrate an eight-wheeled ous capable of seating thirty-three passengers, which has been constructed and put into commission by the American Motorway Equipment Co., of New York. It has a rigid frame and is mounted on rigid streetcar-type " trucks" front and rear,, each being separaAely detachable, and all the power plant being concentrated on the front truck and detachable from the chassis as a unit therewith. A low loading line is rendered possible by this method of disposing of the power plant. The system of transmission adopted gives eight forward speeds and two reverse. Up. to the present, the manufacturers are prepared' to supply lames with a seating capacity of from twenty one to thirty-three, coaches with a seating capacity from eighteen to thirty, and a street car with a, seating capacity of thirty-five, all being of the singledeck variety. A great feature of this vehicle is that Westinghouse air brakes operate on all the eight wheels through an independent foot brake. The distribution of the weight over eight tyres materially reduces the cost of tyre maintenance ; and, of course, pneumatic tyres are essential in order that the back wheels can accommodate themselves to the slight difference in radius when turning,