WE TAKE a look at roadside services next week. July 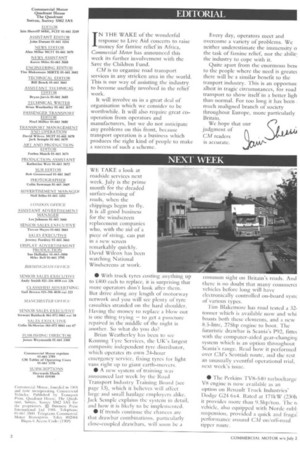 Page 4, 20th July 1985 — WE TAKE a look at roadside services next week. July
Close
Noticed an error?
If you've noticed an error in this article please click here to report it so we can fix it.
Keywords : Agricultural Machinery, Articulated Vehicles, Drawbar, Södertälje Municipality, Scania, Truck

is the prime month for the dreaded surface-dressing of roads, when the chippings begin to fly. It is all good business for the windscreen replacement companies who, with the aid of a piece of string, can put in a new screen remarkably quickly. David Wilcox has been watching National Windscreens at work.

• With truck tyres costing anything up to £400 each to replace, it is surprising that more operators don't look after them. But drive along any length of motorway network and you will see plenty of tyre casualties stranded on the hard shoulder. Having the money to replace a blow out is one thing trying — to get a puncture repaired in the middle of the night is another. So what do you do?

Brian Weatherley has been to see Kenning Tyre Services, the UK's largest composite independent tyre distributor, which operates its own 24-hour emergency service, fixing tyres for light vans right up to giant earth-movers.

• A new system of training was announced last week by the Road Transport Industry Training Board (see page 13), which it believes will affect large and small haulage employers alike. Jack Semple explains the system in detail, and how it is likely to be implemented.

• If trends continue the chances are that drawbar combinations, particularly close-coupled drawbars, will soon be a common sight on Britain's roads. And there is no doubt that many commerci vehicles before long will have electronically controlled on-board systc of various types.

Tim Blakemore has road tested a 32tom-KT which is available now and whi boasts both these elements, and a new 8.5-litre, 275hp engine to boot. The futuristic drawbar is Scania's P92, fate( with the computer-aided gear-changii-T system which is an option throughout Scania's range. Read how it performed over CM's Scottish route, and the rest an unusually eventful operational trial, next week's issue.