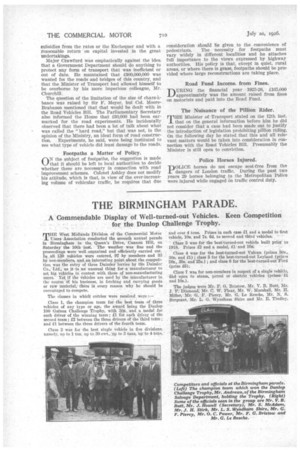 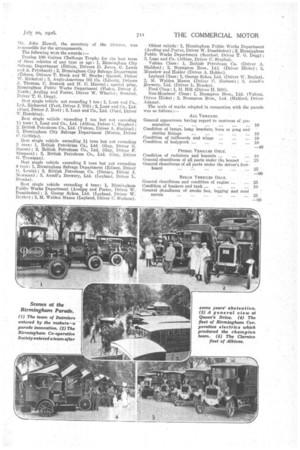 A Commendable Display of Well-turned-out Vehicles. Keen Competition for the Dunlop Challenge Trophy.

mHE West Midlands Division Of the Commereitil Motet. tIkers Association conducted the seventh aninial parade in -Birmingham in the. Queen's Drive, Cannon Hill, on Saturday the 10th inst. The weather was fine and the proceediags were Well organized and efficiently carried out. Ii Jill 130. vehicles were entered, -97 by members and 33 by. non-members, and in interesting pointabout the.competidon was the entry Of three Daimler lorries by the Daimler Co., Ltd., as illsaa unusual thing for-A manufacturer to set his. vehicles in contest with those of non-manufacturing users. Yet, if the ehides are used by the Manufacturer in the course Of his business, in fetching and carrying goods or raw material,there ie. every reason why he should be encouraged to compete.

The classes in which' entries were received were :—

Class 7 was for non-members in respect of a single vehic12., tind open to steam, petrol or electric vehicles (prizes £1 and 10s.).

Mr. John Howell, the secretary responsible for the arrangements.

The following were the awards:

The scale of marks adopted in connection with the parade was as follows :