New man on the block 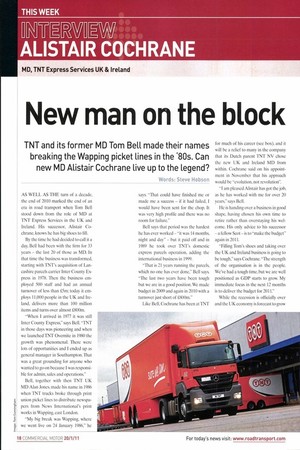 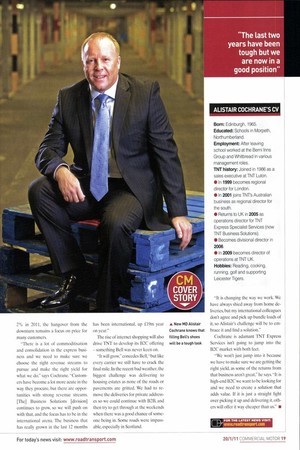 Page 18, 20th January 2011 — New man on the block
Close
Noticed an error?
If you've noticed an error in this article please click here to report it so we can fix it.

TNT and its former MD Tom Bell made their names breaking the Wapping picket lines in the '805. Can new MD Alistair Cochrane live up to the legend?

AS WELL AS THE turn of a decade, the end of 2010 marked the end of an era in road transport when Tom Bell stood down from the role of MD at TNT Express Services in the UK and Ireland. His successor, Alistair Cochrane, knows he has big shoes to fill.

By the time he had decided to call it a day, Bell had been with the firm for 33 years — the last 20 of those as MD. In that time the business was transformed, starting with TNT's acquisition of Lancashire parcels carrier Inter County Express in 1978. Then the business employed 500 staff and had an annual turnover of less than £5m; today it employs 11,000 people in the UK and Ireland, delivers more than 100 million items and turns over almost £800m.

"When I arrived in 1977 it was still Inter County Express," says Bell. "TNT in those days was pioneering and when we launched TNT Overnite in 1980 the growth was phenomenal. There were lots of opportunities and I ended up as general manager in Southampton. That was a great grounding for anyone who wanted to go on because I was responsible for admin, sales and operations."

Bell, together with then TNT UK MD Alan Jones, made his name in 1986 when TNT trucks broke through print union picket lines to distribute newspapers from News International's print works in Wapping, east London.

"My big break was Wapping, where we went live on 24 January 1986," he says. "That could have finished me or made me a success — if it had failed, I would have been sent for the chop. It was very high profile and there was no room for failure."

Bell says that period was the hardest he has ever worked — "it was 14 months, night and day" — but it paid off and in 1989 he took over TNT's domestic express parcels operation, adding the international business in 1999.

"That is 21 years running the parcels, which no one has ever done," Bell says. "The last two years have been tough but we are in a good position. We made budget in 2009 and again in 2010 with a turnover just short of £800m."

Like Bell, Cochrane has been at TNT for much of his career (see box), and it will be a relief to many in the company that its Dutch parent TNT NV chose the new UK and Ireland MD from within. Cochrane said on his appointment in November that his approach would be "evolution, not revolution".

"I am pleased Alistair has got the job, as he has worked with me for over 20 years," says Bell.

He is handing over a business in good shape, having chosen his own time to retire rather than overstaying his welcome. His only advice to his successor — a fellow Scot — is to "make the budget" again in 2011.

"Filling Tom's shoes and taking over the UK and Ireland business is going to be tough," says Cochrane. "The strength of the organisation is in the people. We've had a tough time, but we are well positioned as GDP starts to grow. My immediate focus in the next 12 months is to deliver the budget for 2011."

2% in 2011, the hangover from the downturn remains a focus on price for many customers.

"There is a lot of commoditisation and consolidation in the express business and we need to make sure we choose the right revenue streams to pursue and make the right yield for what we do," says Cochrane. "Customers have become a lot more acute in the way they procure, but there are opportunities with strong revenue streams. [The] Business Solutions [division] continues to grow, so we will push on with that, and the focus has to be in the international arena. The business that has really grown in the last 12 months has been international, up £19m year on year."

The rise of internet shopping will also drive TNT to develop its B2C offering — something Bell was never keen on.

"It will grow," concedes Bell, "but like every carrier we still have to crack the final mile. In the recent bad weather, the biggest challenge was delivering to housing estates as none of the roads or pavements are gritted. We had to remove the deliveries for private addresses so we could continue with B2B, and then try to get through at the weekends when there was a good chance of someone being in. Some roads were impassable, especially in Scotland. "It is changing the way we work. We have always shied away from home deliveries, but my international colleagues don't agree and pick up bundle loads of it, so Alistair's challenge will be to embrace it and find a solution."

Cochrane is adamant TNT Express Services isn't going to jump into the B2C market with both feet.

"We won't just jump into it because we have to make sure we are getting the right yield, as some of the returns from that business aren't great," he says. "It is high-end B2C we want to be looking for and we need to create a solution that adds value. If it is just a straight fight over picking it up and delivering it, others will offer it way cheaper than us." •