Training within the bus industry—municipal undertakings 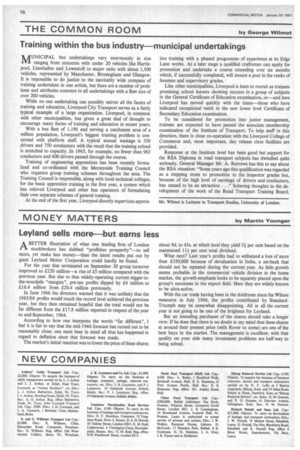 Page 78, 20th January 1967 — Training within the bus industry—municipal undertakings
Close
Noticed an error?
If you've noticed an error in this article please click here to report it so we can fix it.
Keywords : Alternative Education, Liverpool, Apprenticeship, Bus, Marine Engineering And Research Institute, Education

MUNICIPAL bus undertakings vary enormously in size ranging from concerns with under 20 vehicles like Hartlepool, Llandudno and Lowestoft to major units with about 1,500 vehicles, represented by Manchester, Birmingham and Glasgow. It is impossible to do justice to the inevitably wide compass of training undertaken in one article, but there are a number of problems and attributes common to all undertakings with a fleet size of over 200 vehicles.

With a bus fleet of 1,196 and serving a catchment area of a million population, Liverpool's biggest training problem is concerned with platform staff. A typical annual wastage is 350 drivers and 750 conductors with the result that the training school is stretched to capacity. In 1965, for example, no fewer than 963 conductors and 600 drivers passed through the course.

Training of engineering apprentices has been recently formalized and co-ordinated with the Merseyside Training Council who 'organize group training schemes throughout the area. The Training Council is responsible, along with local technical colleges, for the basic apprentice training in the first year, a system which has relieved Liverpool and other bus operators of formulating their own separate schemes of general training.

At the end of the first year, Liverpool directly supervizes appren

tice training with a phased programme of experience at its Edge Lane works. At a later stage a qualified craftsman can apply for promotion and undertake a course extending over six months which, if successfully completed, will ensure a post in the ranks of foremen and supervisory grades.

Like other municipalities, Liverpool is keen to recruit as trainees promising school leavers showing success in a group of subjects in the General Certificate of Education examination, or—and here Liverpool has moved quickly with the times—those who have indicated exceptional merit in the new lower level Certificate of Secondary Education examination.

To be considered for promotion into junior management, trainees are expected to have passed the associate membership examination of the Institute of Transport. To help staff in this direction, there is close co-operation with the Liverpool College of Commerce and, most important, day release class facilities are provided.

Response at the Institute level has been good but support for the RSA Diploma in road transport subjects has dwindled quite seriously. General Manager Mr. A. Burrows has this to say about the RSA situation: "Some years ago this qualification was regarded as a stepping stone to promotion to the inspector grades but, because of the high level of earnings of drivers and conductors, has ceased to be an attraction . . ." Sobering thoughts in the development of the work of the Road Transport Training Board.