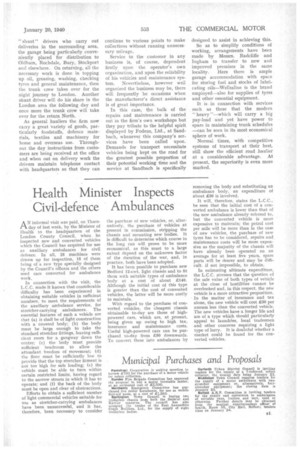 Page 27, 20th January 1940 — Health Minister Inspects Civil-defence Ambulances
Close
Noticed an error?
If you've noticed an error in this article please click here to report it so we can fix it.

AN informal visit was paid, on Thursday of last week, by the Minister of Health to the headquarters of the London County Council, when he inspected new and converted vehicles which the Council has acquired for use as auxiliary ambulances for civil defence. In all, 25 machines were drawn up for inspection, 15 of them being of a new type specially designed by the Council's officers and the others used cars converted for ambulance work.

In connection with the visit, the L.C.C. made it known that considerable difficulty has been experienced in obtaining suitable vehicles in sufficient numbers, to meet the requirements of the auxiliary ambulance service, for stretcher-carrying ambulances. The essential features of such a vehicle are that (a) it shall be of light construction with a covered body; (b) the body must be large enough to take the standard stretcher fittings, leaving sufficient room for a gangway down the centre; (c) the body must provide sufficient headroom to allow the attendant freedom of movement; (d) the floor must be sufficiently Tow to provide that the top stretcher fitment is not too high for safe loading; (e) the vehicle must be able to turn within certain restricted limits, having regard to the narrow streets in which it has to operate; and (f) the back of the body must be open and clear of obstructions.

Efforts to obtain a sufficient number of light commercial vehicles suitable for use as stretcher-carrying ambulances have been unsuccessful, and it has, therefore, been necessary to consider

the purchase of new vehicles, or, alternatively, the purchase of vehicles at present in commission, stripping the chassis and mounting new bodies. It is difficult to determine which course in the long run will prove to be more economical, as this must to a large extent depend on the unknown factor of the duration of the war, and, in practice, both have been adopted.

It has been possible to purchase new Bedford 12-cwt. Tight chassis and to fit them with suitable types of ambulance body at a cost of about £140. Although the initial cost of this type is greater than the cost of converted vehicles, the latter will be more costly to maintain.

With regard to the purchase of converted vehicles, the cheapest chassis obtainable to-day are those of highpowered cars, which are, at present, being given up owing to high tax. insurance and maintenance costs. Useful high-powered cars can be purchased to-day from £50 downwards. To convert these into ambulances by removing the body and substituting an ambulance body, an expenditure of about £30 is involved.

It will, therefore, states the L.C.C., be seen that the initial cost of a converted ambulance is lower than that of the new ambulance already referred to, but the converted vehicle is more expensive to maintain; the petrol cost per mile will be more than in the case of new vehicles, the purchase of new tyres has to be considered, repairs and maintenance costs will be more expensive as the majority of the chassis will have already been operated on an average for at least five years, spare parts will be dearer and may be difficult. if not impossible, to obtain.

In estimating ultimate expenditure, the L.C.C. stresses that the question of the sale value of both types of vehicle at the close of hostilities cannot be overlooked and, in this respect, the new vehicle is a more attractive proposition. In the matter of insurance and tax alone, the new vehicle will cost £30 per annum less than the converted vehicle. The new vehicles have a longer life and are of a type which should particularly appeal to laundries, local tradesmen and other concerns requiring a light type of lorry. It is doubtful whether a market could be found for the converted vehicles.