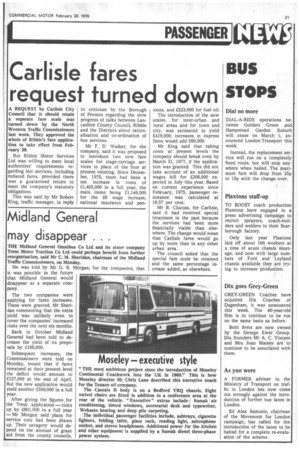 Page 23, 20th February 1976 — Midland General may disappear . . .
Close
Noticed an error?
If you've noticed an error in this article please click here to report it so we can fix it.
Keywords : Geography Of Texas, Midland, Texas, Texas, Nottingham, Business / Finance

He was told by Mr G. B. Morgan, for the companies, that it was possible in the future that Midland General would disappear as a separate com pany. '

The two companies were applying for fares increases. These were granted, Mr Sheridan commenting that the extra yield was unlikely even to cover the companies' increased costs over the next six months.

Back in October Midland General had been told to decrease the yield of its proposals by £166,000.

Subsequent increases, the Commissioners were told on Monday, meant that if fares remained at their present level the deficit would amount to £127,000 at the end of April. But the new application would yield another £589,000 in a full year.

After giving the figures for the Trent application — costs up by £601,000 in a full year — Mr Morgan said plans for service cuts had been drawn up. Their savagery would depend on the amount of grant aid from the county councils.