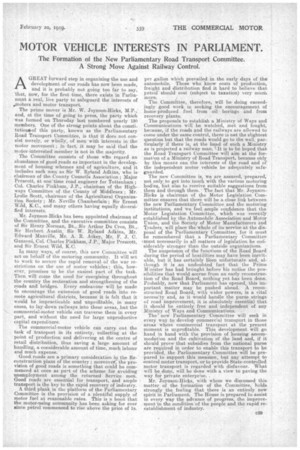 Page 9, 20th February 1919 — MOTOR VEHICLE INTERESTS IN PARLIAMENT.
Close
Noticed an error?
If you've noticed an error in this article please click here to report it so we can fix it.
Keywords : William Joynson-hicks, 1st Viscount Brentford, Transport

The Formation of the New Parliamentary Road Transport Committee. A Strong Move Against Railway Control.

AGREAT forward step in organizing the use and developtnent of our roads has now been made, and it is probably not going too far to say, that, now, for the first time, there exists in Parliament a real, live party to safeguard the interests of „motors and motor transport.

The prime mover is Mr. W. Joynson-Hicks, M.P.,' and, at the time of going to press, the party which was formed on Thursday last numbered nearly 130 members. One of the strong points about the constitutiontof this party, known as the Parliamentary Road Transport Committee, is that it does not consist merely, or wholly, of men with interests in the motor movement ; in fact, it may be said that the motor-interested member is not in the majority.

The Committee consists of those wilco regard an abundance of good roads as important in the development of housing schemes and of agriculture, and it includes such men as Sir W. Ryland Adkins, who is chairman of the County Councils Association ; Major Prescott, at one time road engineer for Tottenham • Col. Charles Pinkham, J.P., chairman of the Highways Committee of the County of Middlesex ; Mr. Leslie Scott, chairman of the Agricultural Organization Society ; Mr. Neville Chamberlain ; Sir Ernest Wild, KC. and many others having equally diversified interests.

In many ways, of course, this new Committee will art on behalf of the motoring community. It will set to work to secure the rapid removal of the war restrictions on the use of motor vehicles ; this, however, promises te be the easiest part of the task. Then will come the need for energising throughout the country the restoration and strengthening of the roads and bridges. Every endeavour will be made to encourage the extension of good roads into remote agricultural districts, because it is felt that it would be impracticable and unprofitable, in many cases, to lay down railways into these areas, but the commercial-motor vehicle can traverse them in every part, and without the need for large unproductive capital expenditure.

The commercial-motor vehicle can carry out the task of transport in its entirety, collecting at the point of production and delivering at the centre of retail distribution, thus saving a largo amount of handling, a considerable amount of time, much labour and much expense. Good roads are a primary consideration in the Reconstruction plans of the country ; moreover; the provision of good roads is something that could be commenced at once as part of the scheme for avoiding unemployment among the returned Service men. Good roads are essential for transport, and ample transport is the key to the rapid recovery of industry. A third plank in the platform of the Parliamentary Committee is the provision of a plentiful supply of motor fuel at reasonable rates. This is a boon that the motor-using community has been asking for ever since petrol commenced to rise above the price of is. per gallon which prevailed in the early days of the automobile. Those who know costs of production, freight and distribution find it hard to believe that. petrol should cost (subject to taxation) very mu& more.

The Committee, therefore, will be doing exceedingly good work in seeking the encouragement of home-produced fuel from oil borings and from recovery plants. The proposals to establish a Ministry of Ways and Communications will be watched, met and fought, because, if the roads and the railways are allowed to come under the same control, there is net the slightest question but that the roads would go to the wall, particularly.if there is, at the had of such a Ministry as is projected a railway man. It is to be hoped that the Road Transport Committee will aim at the formation of a Ministry of Road Transport, because only by this means can the interests of the road and of the independent motor vehicle be adequately safeguarded. The new Committee is, we are assured, prepared, not only, to get into touch with the various motoring bodies, but also to receive suitable suggestions from thorn and through them. The fact that Mr. JoynsonHicks is chairman of the Motor Legislation Committee ensures that there will be a close link between the new Parliamentary Committee and the motoring institutions, and we feel ample confidence that the Motor Legislation Committee, which was recently established by the Automobile Association and Motor Union, and the Society of Motor Manufacturers and Traders,-will place the whele of its service-at the disposal of the Parliamentary Committee, for it must be remembered that a Parliamentary Committee 'must necessarily in all matters of legislation be codsiderably stronger than the outside organizations. The suspension of the functions of the Read Board during the period of hostilities may have been inevitable, but it has certainly li:een unfortunate and, although it is an undoubted fact that the Prime Minister has had brought before his notice the possibilities that would accrue from an early reconstruction of the Road Board, nothing yet has been done. Probably, now that Parliament has opened, this important matter may be pushed ahead. A reconstructed Road Board, with wider powers, is a vital necessity and, as it would handle the purse strings of road improvement, it is absolutely essential that it should be entirely free and independent of any Ministry of Ways and Communications. The new Parliamentary Committee will seek in every way to develop commercial transport in those areas where commercial transport at the present moment is unprofitable. This development will go hand, in hand with the provision of housing accommodation and the cultivation of the land and, if it should prove that subsidies from the national purse are required in order to enable this transport to be provided, the Parliamentary Committee will be prepared to support this measure, but any attempt to control motor transport, or to provide State-controlled motor transport is regarded with disfavour. What will be done, will be done with a view to paving the way for private enterprise. .

Mr. Joynson-Hicks, with whom we discussed this matter of the formation of the Committee, holds strongly the feeling that there is an entirely new spirit in Parliament. The House is prepared to assist in every way the advance of progress, the improvementin the condition of the people and the rapid re establishment of industry. •