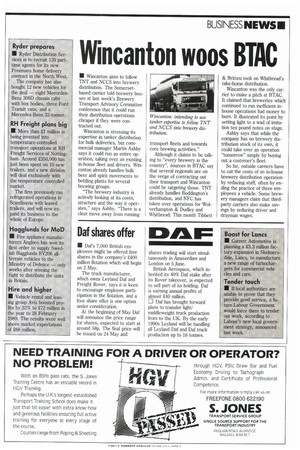 Page 17, 20th April 1989 — Daf shares offer
Close
Noticed an error?
If you've noticed an error in this article please click here to report it so we can fix it.

• Dafs 7,000 British employees might be offered free shares in the company's 2400 million flotation which will begin on 2 May.

The truck manufacturer, which owns Leyland Daf and Freight Rover, says it is keen to encourage employee participation in the flotation, and a free share offer is one option under consideration.

At the beginning of May Daf will announce the price range for shares, expected to start at around 58p. The final price will be issued on 24 May and shares trading will start simultaneously in Amsterdam and London on 5 June.

British Aerospace, which inherited its 40% Daf stake after its Rover takeover, is expected to sell part of its holding. Daf is earning annual profits of almost £40 million.

Daf has brought forward plans to transfer light/ middleweight truck production from to the UK. By the early 1990s Leyland will be handling all Leyland Daf and Daf truck production up to 16 tonnes.