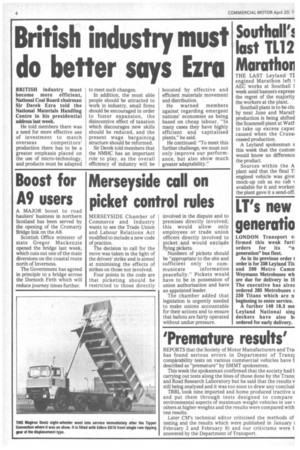 Page 6, 20th April 1979 — Southalh last TL12 Marathon
Close
Noticed an error?
If you've noticed an error in this article please click here to report it so we can fix it.

THE LAST Leyland TI engined Marathon left I AEC works at Southall I week amid banners express the regret of the majority the workers at the plant.

Southall plant is to be clo: by next June and Maratt production is being shifted the Scammell plant at Wad to take up excess capac caused when the Crusa■ ceased production.

A Leyland spokesman s this week that the custom would know no difference the product.

Sources within the A plant said that the final T1 engined vehicle was give] mock-up cab as no cab N available for it and worker: the plant gave it a send-off.