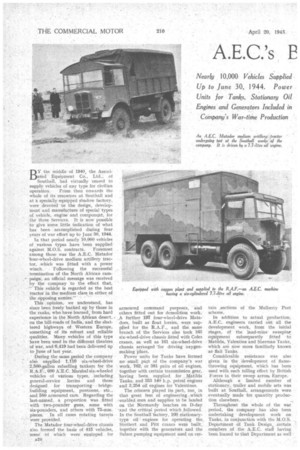 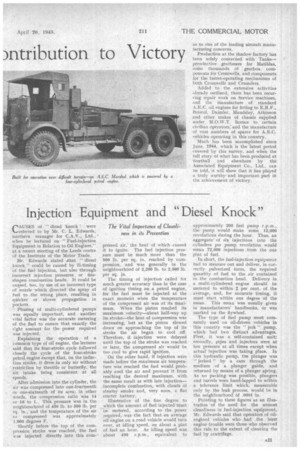 Nearly 10,000 Vehicles Supplied Up to June 30, 1944. Power Units for Tanks, Stationary Oil Engines and Generators Included in Company's War-time Production • BY the middle of 1040, the Associ

ated Equipment Co., Ltd., ol Southall, had virtually ceased to • supply vehicles of any type for civilian operation. From then onwards the whole of its resources at Southall and at a specially equipped shadow factory, were devoted to the design, development and manufacture of special types of vehicle, engine and component, for the three Services. It is now possible • to give some little indication of what has been accomplished during four years of war effort tip to June 30, 1944. In that period nearly 10,000 vehicles of various types have been supplied against M.O.S. contracts. Foremost among these was the A.E.C. Matador four-wheel-drive medium artillery tractor, which was fitted with a power winch. Following the successful termination of the North African cam paign, an official message was received by the company to the effect that, " This vehicle is regarded as the best tractor in the medium class in either of the opposing armies."

This opinion, we understand, has since been freely backed up by those in the ranks, who have learned, fromhard experience in the North African desert, on the hill-roads of India, and the shattered highways of Western Europe, something of its robust and reliable qualities. Many vehicles of tbis type • have been used in the different theatres of war, and 6,419 had been delivered up to June of last year.

-During the same period the company also supplied 1,110 six-wheel-drive 2,500-gallon refuelling tankers for the R.A.F., 600 A-.E.C. Marshal six-wheeled vehicles of various types, including

general-service lorries and those designed for transporting bridgebuilding equipment, pontoons, etc., and 580 armoured cars. Regarding the last-named, a proportion was fitted with two-pounder guns, some with six-pounders, and others with 75-mm, pieces. In all cases rotating turrets • were provided.

The Matador four-wheel-drive chassis also formed the basis of 415 vehicles, some of which were equipped for armoured command purposes, and others fitted out for demolition work.

Power units for Tanks have formed no small part of the company's war work, 762, or 381 pairs of oil engines, together Nyith certain transmission gear, having been supplied for Matilda Tanks, and 353 140 h.p. petrol engines and 3,254 oil engines for Valentines: The cOncern played its part, too in that great feat of engineering which enabled men and supplies to be landed on the Normandy beaches on D-day -and the critical period which. followed. In the Southall-factory, 160 stationarytypo oil.engines for operating the Stothert. and Pitt cranes Vere built; together with the generators and the Sulzer.pumping equipment used on cer

In addition to actual production, A.E.C. engineers carried out all the development work, from the initial stages, of the land-mine • sweeping equipment subsequently .fitted to Matilda, Valentine and Sherman Tanks, which are now more familiarly known as flail Tanks.

Considerablewas also given in the development of flamethrowing equipment, which has been used with such telling effect by British Forces in their sweep across Europe.

Although a limited number of stationary, trailer and mobile sets was built at Southall, arrangements were eventually made for quantity production elsewhere.

Throughout the whole of the war period, the company has also been undertaking development work on Tanks, in conjunction with the M.O.S. Department of Tank Design, certain members of the A.E.C. stall having been loaned to that Department as well as to One of the leading aircraft manufacturing concerns, Production at the shadow factory has been solely concerned with Tankspreselective gearboxes for Matildas, some thousands of gearbox components for Cromwells, and components. for the turret-operating mechanisms of both CromWe1l8 and Crusaders.

Added to the extensive activities already outlined, there has been recurring repair work on Service machines, and the 'manufacture of standard A.E.C. oil engines for fitting to E.R.F., Bristol, Daimler, Maudslay, Atkinson and other makes of. chassis supplied under M.O. W.T. licence to certain civilian operators and the. mannfacture Of vast numbers of spares for A.E.C. vehicles operating in this country..

Much has. been Accomplished since June, 1044, which is the latest period covered by this survey, and when the full story of what has been produced at Southall and elsewhere by the Associated Equipment Co,, Ltd., can be told, it will show that it has played a truly worthy and important part in the achievement of victory.