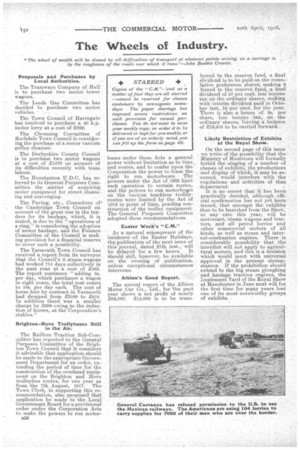 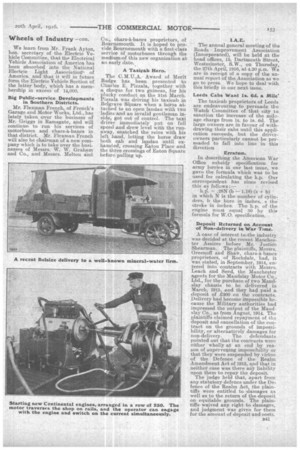 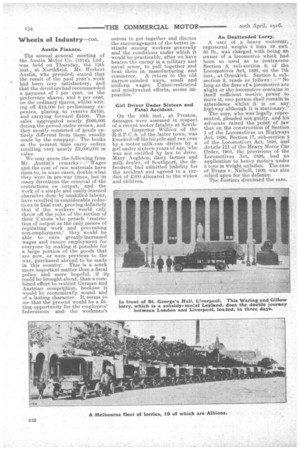 Page 10, 20th April 1916 — The Wheels of Industry.
Close
Noticed an error?
If you've noticed an error in this article please click here to report it so we can fix it.
Keywords : Steam Wagon, Traction Engine

The Tramways Company of Hull is to purchase two motor tower wagons.

The Town Council of Harrogate has resolved to purchase a 40 h.p. motor lorry at a cost of 2892.

The Cleansing Committee of Rochdale Town Council is considering the purchase of a motor vacuum gulley cleanser. The Derbyshire County Council is to purchase two motor wagons at a cost of 21470 on account of its difficulties recently with team labour.

The Hunstanton U.D.C. has referred to its General Purposes Committee the niatter of acquiring motor equipment for street cleansing and scavenging.

The Paving, etc., Committee of' the Cambridge Town Council on account of the great rise in the tenders for its haulage, which7 it is stated, is due to the "operations of a ring," is considering the adoption of motor haulage, and the Finance Committee of the -Council is making provision for a financial reserve to cover such a possibility.

The Yarmouth Town Council has received a report from its surveyor that the Council's 3 ,steam-wagons had worked 714 days collectively in the past year at a cost of £463. The report continues "adding 5s_ per day, which purchases a wagon in eight years, the total cost comes to 18s. per day each. The cost of horse hire by contract in Yarmouth had dropped from 23160 to £618. In addition there was a smaller charge by 2690 owing to the reduction of horses, at the Corporation's stables."

The Railless -Traction Sub-Committee has reported to the General Purposes Committee of the Brighton Town Council that it considers it advisable that application should be made to the appropriate Government Department for an order, extending the period of time for the construction of the overhead equipment on the Brighton and Hove trolleybus routes, for one year as from the 7th August, 1917. The Town ClerI5, in supporting this recommendation, also proposed that application be made to the Local Government Board for a provisional order under the Corporation Acts to make the powers to run motor B36 buses under those Acts a general power without limitation as to time, and routes, and to confer upon the Corporation the power to lease the right to run motorbuses. The powers under the Act of 1903 limit such operation te certain routes, and the powers to run motorburs on the various trackless trolleyroutes were limited by the Act of 1912 in point of time, pending construction of the trolley equipment: The General Purposes Committee adopted these recommendations, Easter Week's "CM."

As a natural consequence of the incidence of the Easter Holidays, the publication of the next issue of this journal, dated 27th inst., will be delayed for a few hours. It should still, however, be available on the evening of publication, unless exceptional circumstances intervene.

Likely Restriction of Exhibits at the Royal Show.

On the second page of this issue , we write of the possibility that the Ministry of Munitions will formally forbid the staging of a number of classes of exhibits, the productions and display of which, it may be assumed, would interfere with the regulations and activities of that department. It is no secret that it has been practically decided, although official confirmation hag not yet been issued, that amongst the exhibits thus to be banished from the Show; at any rate this year, will be motorcars, steam wagons and tractors, and all petrol lorries and other commercial motors of all kinds, as well as steam and internal-combustion engines. There is considerable possibility that the interdict will not apply to agricultural motors, and this is a decision which would meet with universal approval in the present circumstances. If the prohibition should extend to the big steam ploughing and haulage traction engines, the Implement.Yard of the Royal Show at Manchester in June next will for the first time for many years lose one of its most noteworthy groups of exhibits. .

We learn from Mr. Frank Ayton, hon. secretary of the Electrio Vehicle Committee, that the Electrical Vehicle Association of America has been absorbed into the National Electric • Light Associatiort• of America. and that it will in future form the Electric Vehicle Section of the latter body, which has a membership in excess of 14,000.

Mr. Flexman French, of French's Garage and Motor Works, Ltd., has lately taken over the business of Mr. Griggs in Ramsgate, and will continue, to run his services of motorbuses and chars-a-bancs m that district. Mr. Flexman French will also be chairman of a new company which is to take over the businesses of Messrs. W. W. Graham and Co., and Messrs. Melton and Co., chars-,-banes proprietors, of Bournemouth. It is hoped to provide Bournemouth with a first-class service of motorbuses through the inedium,of this new organization at an early date.

The C.M.U.A. Award of Merit Badge has been presented to Charles E. Pizzala, together with a cheque for two guineas, for his plucky conduct on the 31st March. Pizzala was driving his taxicab in Belgrave &pare when a horse attached to an open landau with two ' ladies and an invalid gentleman inside, got out of control. The taxi driver immediately put on full speed and drew level with the runaway, snatched the reins with his left hand, letting the horse draw both cab and landau until exhausted, crossing Eaton Place and the three crossings of Eaton Square before pulling up.

The annual general meetingof the Roads Improvement Association (Incorporated), will be held at the head offices, 15, Dartmouth Street, Westminster, S.W., on Thursday, the 27th April, 1916, at 4.30 p.m. We are in receipt of a copy of the annual report of the Association as we go to press. We hope to deal with this briefly in our next issue.

Leeds Cabs Want Is. 6d. a Mile' The taxicab proprietors of Leeds are endeavouring to persuade the Watch Committee of that city to sanction the increase of the mileage charge from Is. to is. 6d. The large owners are in favour of withdrawing their cabs until this application succeeds, but the driverowners particularly cannot be persuaded to fall into line in this direction Erratum.

In describing the American War Office subsidy specification for army lorries in our last issue, we gave the formula which was to be used for calculating the h.p. Our correspondent has since revised this as follows = .28N (I; — 1.18) (s + b)

in which N is the number of cylinders, le the bore in inches, s the stroke in inches. The h.p. of the engine must equal 30 by this formula for W. 0. specification.

Deposit Returned on Account of Non-delivery in War Time.

A case of interest to-the industry was decided at the recent. Manchester Assizes before Mr. Justice Shearman. The plaintiffs, Messrs. Greenoff and Shaw, chars-à-banes proprietors,. of Rochdale, had, it was stated, in September, 1914, entered into contracts with Messrs. Leach and Seed, the Manchester agents for the Maudelay Motor Co., Ltd., for the purchase of two Maudslay chassis to be delivered in March, 1915, and they had paid a deposit of 200 on the contracts. Delivery had become impossible because the Military authorities had impressed the output of the Maudslay Co., as from August, 1914. The plaintiffs claimed repayment of the deposit and cancellation of the contract on the grounds of impossibility, or alternatively damages for non-delivery. The defendants pointed out that the contracts were either wholly at an end by reason of supervening impossibility or that they were suspended by virtue of the Defence of the Realm Amendment Act of 1915, and that in neither case was there any liability upon them to repay the deposit. The judge held that, apart from any statutory defence under the Defence of the Realm Act, the plaintiffs were entitled to damages as well as to the return of the deposit. on equitable grounds. The plaintiffs waived any right to damages, and judgment was given for them for the amount of deposit and costs.

The annual general meeting of the Austin Motor Co. (1914), Ltd., was held on 7Thursday, the 13th inst., at Northfield. Mr. Herbert Austin, who presided, stated that the result of the past year's work had been very satisfactory, and that the directors had recommended a payment of 7 per _cent. on the preference shares, and 6 per cent. on the ordinary glares, whilst writing off £12,000 for preliminary expenses, placing to reserve £4750, and carrying forward £5500. The sales aggregated nearly 2900,000 during the period under review, and they mostly consisted of goods entirely different from those usually made by the company. The books at the present time carry orders totalling very nearly 22,000,000 in value.

We may quote the following from Mr. Austin's remarks :—" Wages and the cost of raw materials have risen to, in some cases, double what they were in pre-war times, but in many directions the removal of the restrictions on output, and the work of a simple and easily-learned character done by unskilled labour, have resulted in considerable reductions in finarcost, proving definitely that if the workers would cnly throw off the yoke of the section of their Unions who preach 'restriction of output as the only means of regulating work and preventing non-employment,' they would be able to ei:rn greatly-increased wages and ensure employment for everyone by making it possible for a large portion of the goods that are now, or were previous to the war, purchased abroad to be made in this country. This is a much more important matter than a fiscal policy and more 'hopeful, if it,, could be brought about, than a combined effort to restrict German and Austrian competition, because it would be economically sound and of a lasting character. It seems to me that the present would be a fitting opportunity for the employers' federations and the workmen's unions to get together and discuss the encouragement of the better instincts among workers generally and the conditions under which it would be practicable, after we have beaten the enemy in a military and naval sense, to pull together and beat them in manufacturing and commerce. A return to the old narrow-minded ways, small . and uniform wages, Union-restricted and misdirected efforts, seems impossible."

On the 10th inst., at Preston, damages were assessed in respect of a recent motor fatality at Southport. Inspector Willcox of the iR.S.P.C.A. of the latter town, was knocked off his bicycle and run over by a motor milk-van driven by a girl under sixteen years of age, who was not entitled by law to drive. Mary Aughton, dairy farmer and milk dealer, of Southport, the defendant, had admitted liability for the accident and agreed to a verdict of £300 allocated to the widow and children. An Unattended Lorry.

The Justices dismissed the case.