Daf BV ahead at half time 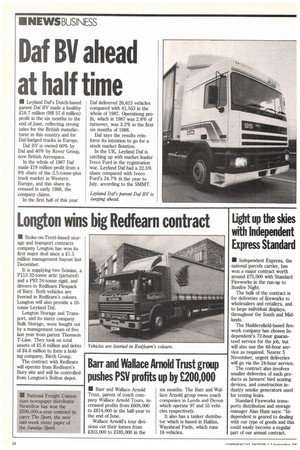 Page 10, 1st September 1988 — Daf BV ahead at half time
Close
Noticed an error?
If you've noticed an error in this article please click here to report it so we can fix it.

• Leyland Dafs Dutch-based parent Daf BV made a healthy £16.7 million (Hfl 57.6 million) profit in the six months to the end of June, reflecting strong sales for the British manufacturer in this country and for Daf-badged trucks in Europe.

In the whole of 1987 Daf made £19 million profit from a 9% share of the 3.5-tonne-plus truck market in Western Europe, and this share increased in early 1988, the company claims.

Daf says the results reinforce its intention to go for a stock market flotation.

In the UK, Leyland Daf is catching up with market leader Iveco Ford in the registration war. Leyland Daf had a 22.5% share compared with Iveco Ford's 24.7% in the year to July, according to the SMMT.