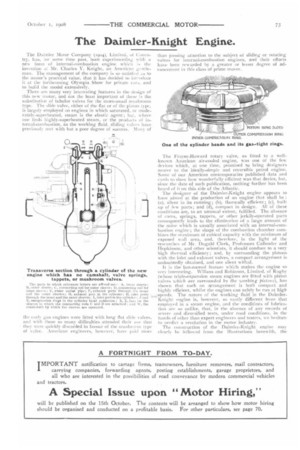 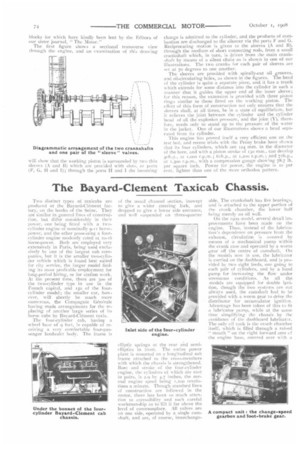 The Daimler Motor Company (1904), Limited, ol Coventry, has, tor some time past, been experimentingwith a new form of internal-combustion engine which is the invention of Mr. Charles V. Knight, an American gentleman. The management of the company is so satisfied as to the motor's practical value, that it has decided to int7-,aluce it at the forthcoming Olympia Show for private car,, and to build the model extensively.

There are many very interesting features in the design of this new motor, and not the least important of these is the substitution of tubular valves for the more-usual mushroom type. The slide valve, either of the flat or of the piston type, is largely employed on engines in which saturated, or moderatelv-superheated, steam is the elastic agent ; but, where one finds highly-superheated steam, or the products of internal-combustion, as the working fluid, sliding valve, have previously met with but a poor degree of success. !Many of the earl.y gas engines were fitted with long flat slide valves, and with these so many difficulties attended their tis•V that they were quickly discarded in favour of the mushroom type of valve. American engineers, however, have paid more than passing attention to the subject of sliding or rotating valves for internal-combustion engines, and their efforts have been rewarded by a greater or lesser degree of advaneement in this class of prime mover.

The Frayer-Howard rotary valve, as fitted to a wellknown American air-cooled engine, was one of the few devices which, at one time, promised to bring designers nearer to the ideally-simple and reversible petrol engine_ StAlle of our American contemporaries published data and cards ro show how wonderfully efficient was that device, but, since the date of such publication, nothing further has been heard of it on this side of the Atlantic.

The designer of the Daimler-Knight engine appears to have aimed at the production of an engine that shall be ; (a), silent in its running; (b), thermally efficient ; (c), built up of few parts; and (d), compact in design. All of these conditions are, to an unusual extent, fulfilled. The absence of cams, springs, tappets, or other jerkily-operated parts consequently leads to the elimination of a large amount of the noise which is usually associated with an internal-combustion engine; the shape of the combustion chamber combines the maximum of cubical capacity with the minimum of exposed wall area, and, therefore, in the light of the researches of Mr. Dugald Clerk, Professors Callender and Hopkinson, and other scientists, it should conduce to a very high thermal efficiency; and, by surrounding the pistons with the inlet and exhaust valves, a compact arrangement is undoubtedly obtained, and one silent withal,

It is the last-named feature which makes the engine so very interesting. Willans and Robinson, Limited, of Rugby (whose triple-expansion steam engines are fitted with piston

valves which are surrounded by the working has shown that such an Arrangement is both compact and highly efficient, whilst the engines can safely he run at high

,.,_;:speeds. The nature of the working fluid in the DaimlerKnight engine is, however, so vastly different from that employed in a steam engine, and the conditions of lubrication sire so unlike, that, in the absentee of any records of severe and diversified tests, under road conditions, in the hands of other than expert engineers and testers, we hesitate to predict a revolution in the motor industry.

The construction Of the .Daimler-Knight. engine may clearly be followed from the illustrations herewith, the blacks for which have kindly been lent by the Editors of our sister journal, " The Motor."

The first figure shows a' sectional' transverse view through the engine, arid an examination of this drawing will show that the working piston is surrounded by two thin sleeves (A and 13) which are provided with slots, or ports (F, G, H and I); through the ports II and I the incoming charge is admitted to the cylinder, and the products of combustion are discharged to the silencer via the ports F and G. Reciprocating motion is given to the sleeves (A and B), through the medium of short connecting rods, from a small crankshaft which, in turn, is driven from the main crankshaft by means of a silent chain as is shown in one of our illustrations. The two cranks for each pair of sleeves are set at 70 degrees to one another. The sleeves are provided with spirally-cut oil grooves, and oil-circulating holes, as shown in the figures. The head of the cylinder is quite a separate piece, and it has .a trunk which extends for some distance into the cylinder in such a manner that it guides the upper end of the inner sleeve; for this reason, the extension is provided with three piston rings similar to those fitted on the working piston. The effect of this form of construction not only ensures that the sleeves shall, at all times, be in a state of equilibrium, hut it relieves the joint between the cylinder and the cylinder head of all the explosion pressure, and the joint (Y), therefore, needs only to stand up to the pressure of the water in the jacket. One of our illustrations shows a head separated front its cylinder.