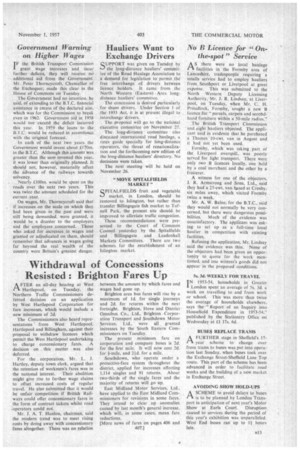 AFTER an all-day hearing at West Hartlepool, on Tuesday, the Northern Traffic Commissioners deferred decision on an application by West Hartlepool Corporation for fare increases, which would include a

new minimum of 2d. • The Commissioners also heard representations from West Hartlepool. Hartlepool and Billingham, against their proposal to withdraw licences which permit the West Hartlepool undertaking to charge concessionary fares, A decision on this matter was also deferred.

For the corporation, Mr. L. J. Hartley, deputy town clerk, argued that the retention of workmen's fares was in the national interest. Their abolition might give rise to further wage claims to offset increased costs of regular travel. He also submitted that it would be unfair competition if British Railways could offer concessionary fares in the form of contract tickets whilst road ,operators could not, Mr, J. A. T. Hanlon, chairman, said the modern trend was to meet rising costs by doing away with concessionary fares altogether. There was no relation . between the amount by which fares and wages had gone up.

Brighton area bus fares will rise by a maximum of id. for single journeys and 2d. for returns within the next fortnight. Brighton, Hove and District' Omnibus Co.. Ltd., Brighton 'Corporation Transport and Southdown Motor Services, Ltd.. were all granted increases by the South Eastern Commissioners on Tuesday.

The present minimum fare on corporation and company buses is 2d. for the first mile, It will now cost 2d. for 4-mile, and 24d. for a mile.

,Southdown, who operate under a protective-faze system throughout the district, applied for increases affecting 1.114 singles and 91 returns. About two-thirds of the single fares and the majority of returns will go up.

East Midland Motor Services. Ltd., have applied to the East Midland Commissioners for revisions in some fares. They intend to clear up anomalies caused by last month's general increase, which will, in some cases, mean fare reductions.