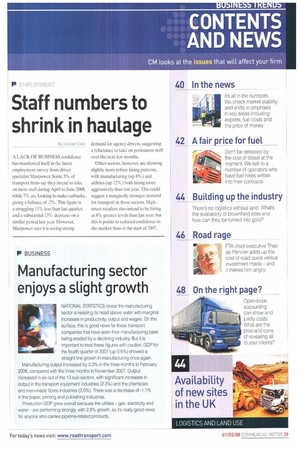 Page 39, 1st May 2008 — Manufacturing sector enjoys a slight growth
Close
Noticed an error?
If you've noticed an error in this article please click here to report it so we can fix it.

NATIONAL STATISTICS reveal the manufacturing sector is keeping its head above water with marginal increases in productivity, output and wages. On the surface, this is good news for those transport companies that have seen their manufacturing base being eroded by a declining industry. But it is important to treat these figures with caution. GDP for the fourth quarter of 2007 (up 0.6%) showed a straight line growth in manufacturing once again.

Production GDP grew overall because the utilities — gas, electricity and water — are performing strongly, with 2.8% growth, so it's really good news for anyone who carries pipeline-related products.