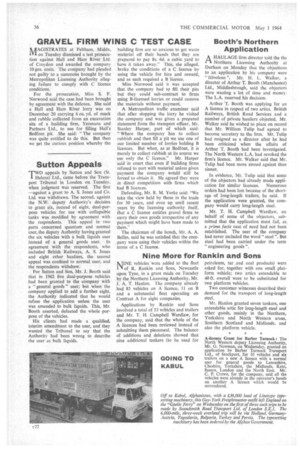 Page 58, 1st May 1964 — Nine More for R ankin and Sons
Close
Noticed an error?
If you've noticed an error in this article please click here to report it so we can fix it.
Keywords : Business / Finance

rik TINE vehicles were added to the fleet IN of R. Rankin and Sons, Newcastle upon Tyne, in a grant made on Tuesday

• by the Northern Licensing Authority, Mr. J. A. T. Hanlon. The company already had 83 vehicles on A licence, 11 on B and a substantial fleet operating on Contract A for eight companies.

Applications by Rankin and Sons involved a total of 53 vehicles and trailers and Mr. T. H. Campbell Wardlaw, for the company, said that the whole of the A licences had been reviewed instead of submitting them piecemeal. The balance of additions and deletions showed that nine additional tankers (to be used for petroleum, tar and coal products) were asked for, together with one small platform vehicle; two artics extendable to 40 ft. overall were to be substituted for two platform vehicles.

steel. Mr. Hanlon granted seven tankers, one extendable artic for long-length steel and other goods, mainly in the Northern, Yorkshire and North Western areas, Southern Scotland and Midlands, and also the platform vehicle.

A-licence Grant for Barber Turflock: The North Western deputy Licensing Authority, Mr. G. Newman, on Wednesday, granted an application by Barber Turnock Transport Ltd., of Stockport, for 10 vehicles and six trailers on a new A licence with a normal user for general goods to Lancashire, Cheshire, Yorkshire, the Midlands, Kent, Sussex, London and the North East. Mr. C. P. Crowe, for the company, said all the vehicles were already in the operator's hands on another A licence which would be surrendered.