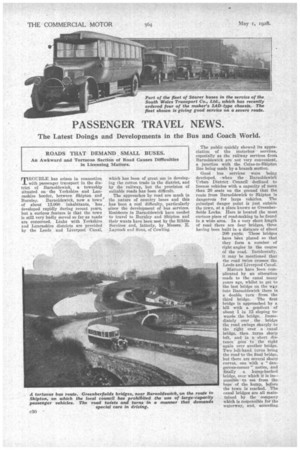 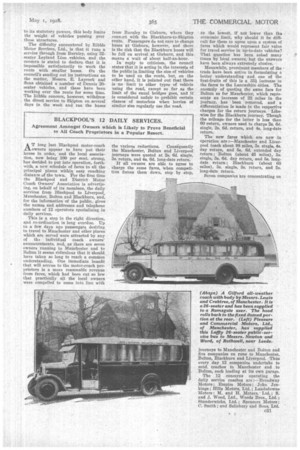 Page 52, 1st May 1928 — PASSENGER TRAVEL NEWS.
Close
Noticed an error?
If you've noticed an error in this article please click here to report it so we can fix it.

An Awkward and Tortuous Section of Road Causes Difficulties in Licensing Matters.

TROUBLE has arisen in connection with passenger transport in the district of Barnoldswick, a township situated on the Yorkshire and Lancashire border, between Skipton and Burnley. Barnoldswick, now a town.' of about 13,000 inhabitants, has developed rapidly -during recent years, but a curious feature is that the town is still very badly Served so fares roads are concerned. Links with Yorkshire and Lancashire districts are provided by the Leeds and Liverpool Canal,

which has been of great use in developing the cotton trade in the district, and by the railway, but the provision of suitable roads has been difficult.

The approaches by road are much in the nature of country lanes and this has been a real difficulty, particularly since the development of bus .services. Residents in Barnoldswick have needed to travel to Burnley and Skipton and their wants have been met by the Ribble Services and, latterly, by Messrs. E. Laycock and Sons, of Cowling.

The public quickly showed its appreciation of the motorbus services, especially as the railway services from Barnolciswic.k are not very convenient, a junction with the Colne-to-Skipton line being made by a branch section.

Oood bus services were being developed, when the Barnoldswick Urban District Council declined to license vehicles with a capacity of more than 20 seats on the ground that the route from 13arnoldswick to Skipton is dangerous for large vehicles. The principal danger point is just outside the town, at a place known as Greenberfields Locks. Here is located the most curious piece of road-making to be found in a wide area. In a very short length of road there are four bridges, three having been built in a distance of about

200 yards. These bridges have been placed so that they form a number of right angles in the course of the road. Incidentally, it may be mentioned that the road twice crosses the Leeds and Liverpool Canal.

Matters have been com plicated by an alteration made to the canal many years ago, whilst to get to

the last bridge on the wip.y.

into Barnoldswick there is a double turn from the third bridge. The first

bridge is approached by a .. hill with a gradient of about 1 in 12 sloping towards the bridge. Immediately over the bridge the road swings sharply to the right over a canal bridge, then turns sharp left, and in a. short distance goes to the right again over another bridge. Two left-hand turns bring the road to the final bridge, but there are several sharp curves, one with a " dangerous-corner " notice, and finally a hump-backed bridge, over which it is impossible to see from the base of the hump, before the town is reached. The canal bridges are all maintained by the company which is responsible for the waterway, and, according

to its statutory powers, this body limits the 'weight of vehicles passing over these structures.

The difficulty encountered by Ribble Motor Services, Ltd., is that it runs a service through from Burnley, using•32. seater Leyland Lion vehicles, and the concern is stated to declare that it is impossible satisfactorily to work the route with smaller buses. On the council's sending out its instructions on the matter, Messrs. E. Laycock and Sons obtained a number of Dennis 20seater vehicles, and these have been working over the route for some time. The Ribble concern, however, withdrew the direct service to Skipton on several days in the week and ran the buses from Burnley to Gisburn, where they conncct with the Blackburn-to-Skipton route. Passengers do not care to change buses at Gisburn, however, and there is the risk that the Blackburn buses will be full on arrival at Gisburn, and this means a wait of about half-an-hour.

In reply to criticism, the council states that it is acting in the interests of the public in limiting the size of vehicles to be used on the route, but, on the other hand, it is pointed out that there is no limit to other types of vehicle using the road, except so far as the limit of the canal bridges goes, and it is considered unfair to prohibit certain classes of motorbus when lorries of similar size regularly use the-road.