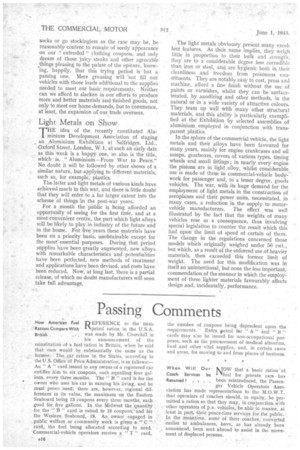 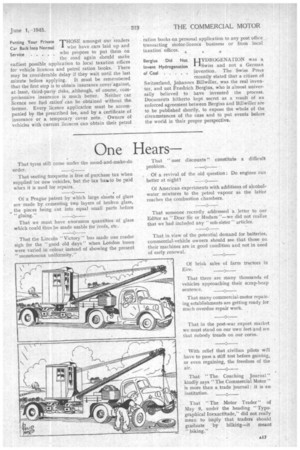 How American Fuel Fp EFERENCE to the basic Rations Ccmpare With "petrol ration in the U.S.A. British .

was made by Mr. Churchill in his announcement of the reinstitution of a fuel ration in Britain, when he said that ours would be substantially the same as the former. The ear ration in the States, according to the U.S. Office of Price Administration, is as follows:— An " A " card issued to any owner of a registered car entitles him to six coupons, each equalling four gallons, every three months. The " B " card is for the ownet who uses his car in earning his living, and he must prove need; there are, however, regional differences in its value, the maximum on the Eastern Seaboard being 13 coupons every three months, each good for, five gallons. In the Midwest the quantity for the ". B " -card is raised to 16 coupons ,' and for . the Western Seaboard, .19. An, owner engaged in public welfare or community work is given card, the fuel being allocated according to need. Commercial-vehicle operators receive a " T " card, the number of coupons being dependent upon the requirements. • Extra etrol for " A and " B " cards may also be issued for non-occupational purposes, such as the procurement of medical attention, food and other vital supplies, and, in certain cases and areas, for moving to and from places of business.

When Will Our Coach Services be

NOW that a basic fuel for private cars has been reintroduced, the Passen

Resumed ? . . . ger Vehicle Operators Association has made representations to the M,O.W.T. that operators of Coaches should, in equity, be permitted a ration so that they may, in conjunction with other operators of p.s. vehicles, -be able to resume, at least in part, their peace timeservices for the public. In the meantime, some of their coaches, converted earlier to ambulances, have, as has already been , announced, been sent abroad to assist in the movement of displaced persons. THOSE amongst our readers A who have cars laid up and who propose to put them on the road again should make eafliest possible application to local taxation offices for vehicle licences and petrol ration books. There may be considerable delay if they wait until the last minute before applying. It must be remembered that the first step is to obtain insurance cover'against, at least, third-party risks, although, of course', comprehensive insurance is much better. Neither car licence nor fuel ratiori can be obtained without the former. Every licence application must be accompanied by the prescribed fee, and by a certificate of insurance or a temporary cover note. Owners of vehicles with current licences can obtain their petrol

Putting Your Private Car Back Into Normal Service

ration books on personal application to any post office transacting Motor-licence business or from local taxationoffices.

of Coal invention. The Swiss Press recently stated that a citizen of Switzerland, Johannes Billwiller, was the real inventor, and not Friedrich Bergius, who is almost universally believed to have invented the process. Documents hitherto kept secret as a result of an enforced agreement between Bergius and Billwiller are to be published shortly, to expose the whole of the circumstances of the case and to put events before the world in their proper perspective.