No Let-down on Plant Hire 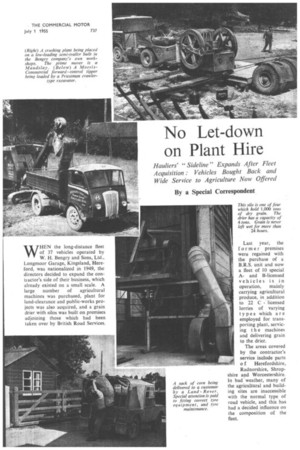 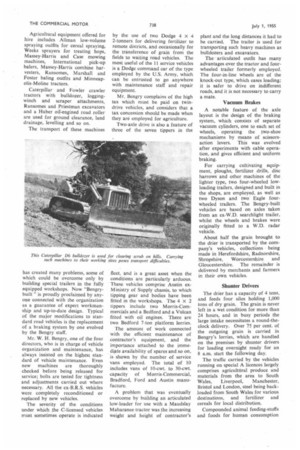 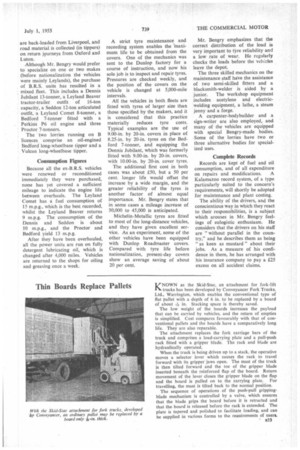 Hauliers' "Sideline" Expands After Fleet Acquisition : Vehicles Bought Back and Wide Service to Agriculture Now Offered By a Special Correspondent

WHEN the long-distance fleet of 37 vehicles operated by W. H. Bengry and Sons, Ltd., Longmoor Garage, Kingsland, Hereford, was nationalized in 1949, the directors decided to expand the conu actor's side of their business, which already existed on a small scale. A large number of agricultural machines was purchased, plant for land-clearance and public-works projects was also acquired, and a grain drier with silos was built on premises adjoining those which had been taken over by British Road Services.

Last year, the former premises were regained with the purchase of a B.R.S. unit and now a fleet of 10 special Aand B-licensed vehicles is in operation, mainly carrying agricultural produce, in _addition to 22 C licensed lorries of varying types which are employed for transporting plant, servicing t h e machines and delivering grain to the drier.

The areas covered by the contractor's service include parts o f Herefordshire, Radnorshire, Shropshire and Worcestershire. In bad weather, many of the agricultural and building sites are inaccessible with the normal type of road vehicle, and this has had a decided influence on the composition of the fleet. Agricultural equipment offered for hire includes Allman low-volume spraying outfits for cereal spraying, Weeks sprayers for treating hops, Massey-Harris and Case mowing machines, International pick-up balers, Massey-Harris combine harvesters, Ransomes, Marshall and Foster baling outfits and Minneapolis-Moline tractors.

Caterpillar• and Fowler crawler tractors with bulldozer, loggingwinch and scraper attachments, Ransomes and Priestman excavators and a Huber oil-engined road roller are used for ground clearance, land drainage, levelling and so on.

The transport of these machines has created many problems, some of which could be overcome only by building special trailers in the fully equipped workshops. Now "Bengrybuilt" is proudly proclaimed by anyone connected with the organization as a guarantee of expert workmanship and up-to-date design. Typical of the major modifications to standard road vehicles is the replacement of a braking system by one evolved by the Bengry staff.

Mr. W. H. Bengry, one of the four directors, who is in charge of vehicle organization and maintenance, has always insisted on the highest standard of vehicle maintenance. Even new machines are thoroughly checked before being released for service; bolts are tested for tightness and adjustments carried out where necessary. All the ex-B.R.S. vehicles were completely reconditioned or replaced by new vehicles.

by the use of two Dodge 4 x 4 2-tonners for delivering fertilizer to remote districts, and occasionally for the transference of grain from the fields to waiting road vehicles. The most useful of the 11 service vehicles is a Dodge command car of the type employed by the U.S. Army, which can be entrusted to go anywhere with maintenance staff and repair equipment.

Mr. Bengry complains of the high tax which must be paid on twindrive vehicles, and considers that a tax concession should be made when they are employed for agriculture.

fleet, and is a great asset when the conditions are particularly arduous_ These vehicles comprise Austin exMinistry of Supply chassis, to which tipping gear and bodies have been fitted in the workshops. The 4 X 2 tippers include two Morris-Commercials and a Bedford and a Vulcan fitted with oil engines. There are two Bedford 7-ton platform lorries.

The amount of work connected with the efficient maintenance of contractor's equipment, and the importance attached to the immediate availability of spares and so on, is shown by the number of service vans employed. The total of 10 includes vans of 10-cwt. to 30-cwt. capacity of Morris-Commercial, Bradford, Ford and Austin manufacture.

A problem that was eventually overcome by building an articulated low-loader for use with a Maudslay Maharanee tractor was the increasing weight and height of contractor's plant and the long distances it had to be carried. The trailer is used for transporting such heavy machines as bulldozers and excavators.

The articulated outfit has many advantages over the tractor and fourwheeled trailer formerly employed. The four-in-line wheels are of the knock-out type, which eases loading; it is safer to drive on indifferent roads, and it is not necessary to carry a mate.

Vacuum Brakes A notable feature of the axle layout is the design of the braking system, which consists of separate vacuum cylinders, one to each set of wheels, operating the Iwo-shoe mechanisms by means of scissorsaction levers. This was evolved after experiments with cable operation, and gives efficient and uniform braking.

For carrying cultivating equipment, ploughs, fertilizer drills, disc harrows and other machines of the lighter type, two four-wheeled lowloading trailers, designed and built in the shops, are employed, as well as two Dyson and two Eagle fourwheeled trailers. The Bengry-built vehicles are based on axles taken from an ex-W.D. searchlight trailer, whilst the wheels and brakes were originally fitted to a W.D. radar vehicle.

About half the grain brought to the drier is transported by the company's vehicles, collections being made in Herefordshire, Radnorshire, Shropshire, Worcestershire and Gloucestershire. The remainder is delivered by merchants and farmers in their own vehicles.

Shunter Drivers The drier has a capacity of 4 tons, and feeds four silos holding 1,000 tons of dry grain. The grain is never left in a wet condition for more than 24 hours, and in busy periods the large intake necessitates a round-theclock delivery. Over 75 per cent. of the outgoing grain is carried in Bengry's lorries, which are handled on the premises by shunter drivers for loading overnight ready for an 8 a.m. start the following day.

The traffic carried by the vehicles running on special A licences largely comprises agricultnral produce and materials from the area to South Wales, Liverpool, Manchester, Bristol and London, steel being back-loaded from South Wales for various destinations, and fertilizer and cereals for local distribution.

are back-loaded from Liverpool, and road material is collected (in tippers) on return jpurneys from Oxford and Luton.

Although Mr. Bengry would prefer to specialize on one or two makes (before nationalization the vehicles were mainly Leylands), the purchase of B.R.S. units has resulted in a mixed fleet. This includes a Dennis Jubilant 13-tonner, a Leyland Beaver tractor-trailer outfit of 16-ton capacity, a Seddon 12-ton articulated outfit, a Leyland Comet 8-tonner, a Bedford 7-tonner fitted with a Perkins P6 oil engine and three Proctor 7-tonners.

Because all the ex-B.R.S. vehicles were renewed or reconditioned immediately they were purchased, none has yet covered a sufficient mileage to indicate the engine life between overhauls. The Leyland Comet has a fuel consumption of 15 m.p.g., which is the best recorded, whilst the Leyland Beaver returns 9 m.p.g. The consumption of the Dennis and Seddon is about 10 m.p.g., and the Proctor and Bedford yield 13 m.p.g.

After they have been overhauled, all the power units are run on fully detergent lubricating oil, which is changed after 4,000 miles. Vehicles are returned to the shops for oiling and greasing once a week. A strict tyre maintenance and recording system enables the "maximum life to be obtained from the covers. One of the mechanics was sent to the Dunlop factory for a course of instruction, and now his sole job is to inspect and repair tyres. Pressures are checked weekly, and the position of the covers on the vehicle is changed at 5,000-mile intervals.

The additional first cost in both cases was about £50, but a 50 per cent, longer life would offset the increase by a wide margin, and the greater reliability of the tyres is another factor of almost equal importance. Mr. Bengry states that in some cases a mileage increase of 30,000 to 45,000 is anticipated.

Michelin-Metallic tyres are fitted to most of the long-distance vehicles, and they have given excellent service. As an experiment, some of the other vehicles have been equipped with Dunlop Roadmaster covers. Compared with tyre life before nationalization, present-day covers show an average saving of about 20 per cent.

Mr. Bengry emphasizes that the correct distribution of the load is very important to tyre reliability and a low rate of wear. He regularly checks the loads before the veil:cies leave the depot.

The three skilled mechanics on the maintenance staff have the assistance of two semi-skilled fitters and a blacksmith-welder is aided by a junior. The workshop equipment includes acetylene and electricwelding equipment, a lathe, a steam jenny and a forge.

A carpenter-bodybuilder and a sign-writer are also employed, and many of the vehicles are equipped with special Bengry-made bodies. Some of the lorries have two or three alternative bodies for specialized uses.

Records are kept of fuel and oil consumption, and of all expenditure on repairs and modifications. A Kalamazoo record system, of a type particularly suited to the concern's requirements, will shortly be adopted for maintenance and plant costing.

The ability of the drivers, and the conscientious way in which they react to their responsibilities, is a subject which arouses in Mr. Bengry feelings of eulogistic enthusiasm. He considers that the drivers on his staff are "without parallel in the country," and he describes them as being "as keen as mustard" about their jobs. As a measure of his confidence in them, he has arranged with his insurance company to pay a £25 excess on all accident claims.