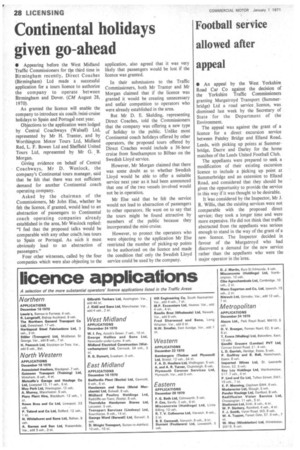 Page 30, 1st January 1971 — Continental holidays given go-ahead
Close
Noticed an error?
If you've noticed an error in this article please click here to report it so we can fix it.
Keywords : Business / Finance

• Appearing before the West Midland Traffic Commissioners for the third time in Birmingham recently, Direct Coaches (Birmingham) Ltd made a successful application for a tours licence to authorize the company to operate between Birmingham and Dover. (CM August 28, 1970).

As granted the licence will enable the company to introduce six coaeh /mini-cruise holidays to Spain and Portugal next year.

Giving evidence on behalf of Central Coachways, Mr D. Wenlock, the company's Continental tours manager, said that he felt that there was not sufficient demand for another Continental coach operating company.

Asked by the chairman of the Commissioners, Mr John Else, whether he felt the licence, if granted, would lead to an abstraction of passengers to Continental coach operating companies already established in the area, Mr Weillock replied: "I feel that the proposed talks would be comparable with any other ccigh /sea tours to Spain or Portugal. As Rich it must obviously lead to an abstraction of passengers."

Four other witnesses, called by the four companies which were also objecting to the application, also agreed that it was very likely that passengers would be lost if the licence was granted.

In their submissions to the Traffic Commissioners, both Mr Tranter and Mr Morgan claimed that if the licence was granted it would be creating unnecessary and unfair competition to operators who were already established in the area.

But Mr D. E. Skelding, representing Direct Coaches, told the Commissioners that the company was offering a new type of holiday to the public. Unlike most Continental coach holidays offered by other operators, the proposed tours offered by Direct Coaches would include a 36-hour cruise from Southampton to Bilbao on the Swedish Lloyd service.

However, Mr Morgan claimed that there was some doubt as to whether Swedish Lloyd would be able to Offer a suitable service next year as it had been announced that one of the two vessels involved would not be in operation.

Mr Else said that he felt the service would not lead to abstraction of passengers to other operators. He went on to say that the tours might be found attractive by members of the public because they incorporated the mini-cruise.

However, to protect the operators who were objecting to the application Mr Else restricted the number of picking-up points to be authorized on the licence and made the condition thaf only the Swedish Lloyd service could be used by the company.