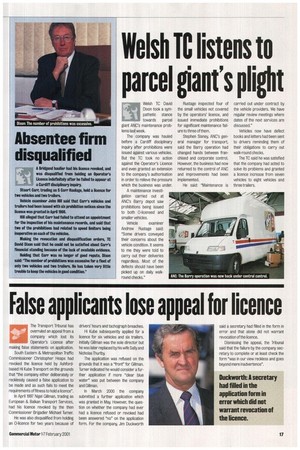 Page 19, 1st February 2001 — Absentee firm disqualified
Close
Noticed an error?
If you've noticed an error in this article please click here to report it so we can fix it.
Keywords : Trailer, Business / Finance

A Bridgend haulier had his licence revoked, and was disqualified from holding an Operator's

iLicence indefinitely after he failed to appear at a Cardiff disciplinary inquiry. Stuart Cam, trading as S Carr Haulage, held a licence for two vehicles and two trailers.

Vehicle examiner John Hill said that Carr's vehicles and trailers had been issued with six prohibition notices since the licence was granted in April 1998.

Hill alleged that Carr had failed to attend an appointment for the inspection of his maintenance records, and said that two of the prohibitions had related to speed limiters being Inoperative on each of the vehicles.

Making the revocation and disqualification orders, TC David Dixon said that he could not be satisfied about Carr's financial standing because of the lack of available evidence.

Holding that Carr was no longer of good repute, Dixon said: The number of prohibitions was excessive for a fleet of only two vehicles and two trailers. He has taken very little trouble to keep the vehicles in good condition."