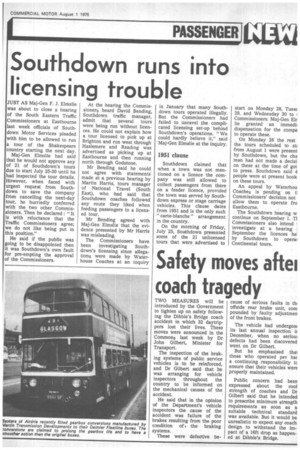 Page 17, 1st August 1975 — Southdown runs into licensing trouble
Close
Noticed an error?
If you've noticed an error in this article please click here to report it so we can fix it.
Keywords : Transport In East Sussex, Southdown Motor Services, Stagecoach Group, Southdown

JUST AS Maj-Gen F. J. Elmslie was about to close a hearing of the South Eastern Traffic Commissioners at Eastbourne last week officials of Southdown Motor Services pleaded with him to be allowed to run a tour of the Shakespeare country starting the next day.

Maj-Gen Elmslie had said that he would not approve any of 21 of Southdown's tours due to start July 25-30 until he had inspected the •tour details. However, when faced with urgent request from Southdown to save the company from cancelling the next-day tour, he hurriedly conferred with the two other Commissioners. Then he declared : "It is with reluctance that the Traffic Commissioners agree; we do not like being put in this position."

He said if the public was going to be disappointed then it was Southdown's own fault for pre-empting the approval of the Commissioners. At the hearing the Commissioners heard David Bending, Southdown traffic manager, admit that several tours were being run without licences. He could not explain how a tour licensed to pick up at Brighton and run west through Haslemere and Reading was advertised as picking up at Eastbourne and then running north through Godstone.

Mr Bending said he could not agree with statements made at a previous hearing by Martin Harris, tours manager of National Travel (South East), who had said that Southdown coaches followed any route they liked when feeding passengers to a licensed tour.

Mr Bending agreed with Maj-Gen Elmslie that the evidence presented by Mr Harris was misleading. The Commissioners have been investigating Southdown's 'licensing since allegations were made by Waterhouse Coaches at an inquiry in January that many Southdown tours operated illegally. But the Commissioners had failed to unravel the complicated licensing set-up behind Southdown's operations. " We could hardly believe it," said Maj-Gen Elmslie at the inquiry.

Southdown claimed that when a town was not mentioned on a licence the company was still allowed to collect passengers from there on a feeder licence, provided the town was served by Southdown express or stage carriage vehicles. This clause dates from 1951 and is the only such " carte-blanche " arrangement in the country.

On the morning of Friday, July 25, Southdown presented some of the 21 unlicensed tours that were advertised to start on Monday 28, Tuesc 29, and Wednesday 30 to 1 Commissioners. Maj-Gen Elr lie granted an immedfi dispensation for the compa to operate these.

On Monday 28 the rest the tours scheduled to st4 from August 1 were present by Southdown, but the cha man had not made a decisi on these at the time of goi to press. Southdown said 4 people were at present book on these tours.

An appeal by Waterhou Coaches is pending on ti Commissioners' decision not allow them to operate fro Eastbourne.

The Southdown hearing w continue on September 1. TI Commissioners also intend investigate at •a hearing September the licences he by Southdown to operal Continental tours.