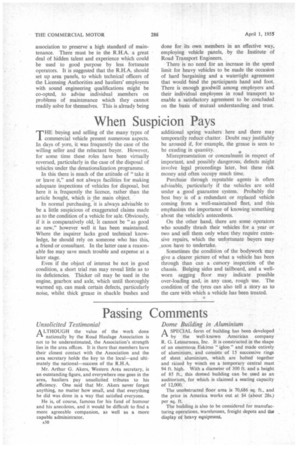 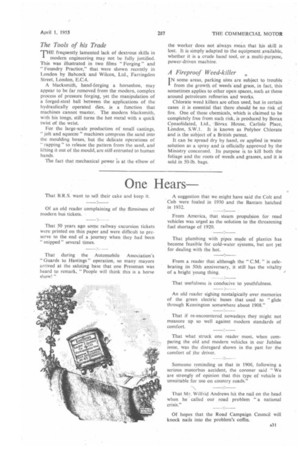 LTHOUGH the value of the work done Cl nationally by the Road Haulage Association is not to be underestimated, the Association's strength lies in the area offices. It is there that members have their closest contact with the Association and the area secretary holds the key to the local—and ultimately the national—success of the R.H.A.

Mr. Arthur a Akers, Western Area secretary, is an outstanding figure, and everywhere one goes in the area, hauliers pay unsolicited tributes to his efficiency. One said that Mr. Akers never forgot anything, no matter how small, and that everything he did was done in a way that satisfied everyone.

He is, of course, famous for his fund of humour and his anecdotes, and it would be difficult to find a more agreeable companion, as well as a more capable administrator.

ASPECIAL form of building has been developed by the well-known American company R. G. Letourneau, Inc. It is constructed in the shape of an enormous Eskimo " igloo " and made entirely of aluminium, and consists of 15 successive rings of sheet aluminium, which are bolted together and raised by winch on a temporary central mast 94 ft. high. With a diameter of 300 ft. and a height of 85 ft., this domed building can be used as an auditorium, for which is claimed a seating capacity of 12,000.

The building is also to be considered for manufacturing operations, warehouses, freight depots and the display of heavy equipment.

The Tools of his Trade

1HE frequently lamented lack of dextrous skills in

modern engineering may not be fully justified. This was illustrated in two films Forging" and "Foundry Practice," that were shown recently in London by Babcock and Wilcox, Ltd., Farringdon Street, London, E.C.4.

A blacksmith, hand-forging a horseshoe, may appear to be far removed from the modern, complex process of pressure forging, yet the manipulation of a forged-steel ball between the applications of the hydraulically operated dies, is a function that machines cannot master. The modern blacksmith, with his tongs, still turns the hot metal with a quick twist of the wrist.

For the large-scale production of small castings, "jolt and squeeze" machines compress the sand into the moulding boxes, but the delicate operations of " rapping " to release the pattern from the sand, and lifting it out of the mould, are still entrusted to human hands.

The fact that mechanical power is at the elbow of the worker does not always mean that his skill is lost. It is simply adapted to the equipment available, whether it is a crude hand tool, or a multi-purpose, power-driven machine.

IN some areas, parking sites are subject to trouble I from the growth of weeds and grass, in fact, this sometimes applies to other open spaces, such as those around petroleum refineries and works.

Chlorate weed killers are often used, but in certain cases it is essential that there should be no risk of fire. One of these chemicals, which is claimed to be completely free from such risk, is produced by Borax Consolidated, Ltd., .Borax House, Carlisle Place, London, S.W.'. It is known as Polybor Chlorate and is the subject of a British patent.

It can be spread dry by hand, or applied in water solution as a spray and is officially approved by the Ministry concerned. Its purpose is to kill both the foliage and the roots of weeds and grasses, and it is sold in 50-1b. bags.