How Dust Can Cause Damage to Engines 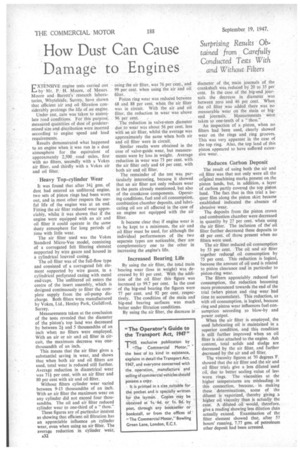 Page 34, 19th September 1947 — How Dust Can Cause Damage to Engines
Close
Noticed an error?
If you've noticed an error in this article please click here to report it so we can fix it.
Keywords :

Surprising Results Obtained from Carefully Conducted Tests With and Without Filters

Under test, care was taken to aSsimilate road conditions. For this purpose; measured quantities of dust of predetermined size and distribution were inserted according to engine speed and load requirements.

Heavy Top-cylinder Wear It was found that after 341 .gms. of dust had entered an unfiltered engine, two sets of piston rings had been worn out, and in most other respects the useful life of the engine was at an end. Fitting the air filter reduced wear appreciably, whilst it was shown that if the engine were equipped with an air and oil filter it could operate in the same dusty atmosphere for long periods of time with little wear.

The air filter used was the Vokes Standard Micro-Vee model, consisting of a corrugated felt filtering element supported by wire gauze and housed in a cylindrical louvred casing.

The oil filter was of the full-flow type and consisted of a corrugated felt element supported by wire gauze, In a cylindrical perforated casing with metal endcaps. The unfiltered oil enters the centre of the insert assembly, which is designed continuously to filter the complete supply from the oil-pump discharge. Both filters were manufactured by Vokes, Ltd., Henley Park, Guildford, Surrey.

Measurements taken at the conclusion of the tests revealed that the diameter of the piston's top land was decreased by between 2i and 5 thousandths of an inch when no filters were employed. With an air or air and oil filter in circuit, the maximum decrease was onethousandth of an inch.

These figures are of particular interest as showing that efficient oil filtration has an appreciable influence on cylinder wear, even when using an air filter. The average reduction in cylinder wear,

The reduction in valve-stem diameter due to wear was about 56 per cent. less With an air filter, whilst the average was approximately the same when both air and oil filter were in circuit.

Similar results were obtained in the case of valve-guide wear, but measurements were by loss in weight. Average reduction in wear was 73 per cent. with the air filter only and 64 per cent, with both air and oil filter.

The remainder of the test was particularly interesting, because it showed that an air filter not only reduces wear in the parts already mentioned, but also of the crankcase components. Operating conditions, fuel and oil consumption, combustion chamber deposits, and lubricating oil are all affected in the case of an engine not equipped with the air filter.

It became clear that if engine wear is to be kept to a minimum, the air and oil filter must be used, for although the individual performances of the two separate types are noticeable, they are complementary one to the other in increasing the engine's life.

By using the air filter, the total main • bearing wear (loss in weight) was decreased by 81 per cent. With the addition of the oil filter this figure was increased to 99.7 per cent. In the case • of the big-end bearing the figures were 77 per cent and 92 per cent. respectively. The condition of the main and big-end bearing surfaces was much better under filtration conditions.

By using the air filter, the decrease in

diameter of the, main journals of the crankshaft was reduced by 20 to 35 per cent. In the case of the big-end journals the decrease in diameter was between zero and 46 per cent. When the oil filter was added there was no measurable wear on the main or bigend journals. Measurements were taken to• one-tenth of a "thou."

An inspection of a piston, when no filters had been used, clearly showed wear on the rings and ring grooves. This was very apparent in the case of the top ring. Also, the top land of this piston appeared to have suffered extensive wear.

Reduces Carbon Deposit The result of using both the air and oil filter was that not only were all the original machining marks present on the piston lands, but, in addition, a layer of carbon partly covered the top piston land. The fact that in this trial a lacquer film along the piston skirt became established indicated the absence of abrasive wear.

The deposits from the piston crown and combustion chamber were decreased in quantity by 27 per cent, when using the air filter. The inclusion of the' oil filter further decreased these deposits to 48 per cent. of those present when no filters were used.

The filters appreciably reduced fuel consumption, the reduction becoming more pronounced towards the end of the trial (when piston and ringwear had time to accumulate). This reduction, as with oil consumption, is logical, because ring and piston wear influences fuel consumption according to blow-by and power output.

The viscosity figures at 70 degrees F. showed that the air filter and the air and oil filter trials give a less diluted used oil, due to better sealing value of less worn rings. The viscosities at the higher temperatures are misleading in this connection, because, in making these 'determinations, some of the diluent is vaporized, thereby giving a higher oil viscosity than is actually the case. A diluted oil would, therefore, give a reading showing less dilution than actually existed. Examination of the filter element showed that, after 57 hours' running, 7.77 gms. of petroleum ether deposit had been arrested.