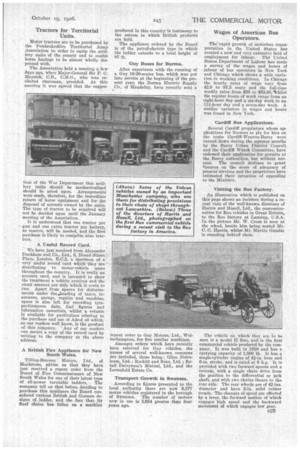 The rapid growth of motorbus transportation in the United States has created a new and very extensive field of employment for labour. The United States Department of Labour has made a survey of the wages and hours of \labour of bus operators in New York and Chicago which shows a wide variation in working conditions. In Chicago the hourly rates of wage vary from 42.9 to '87.5 cents and the full-time weekly rates from $25 to $52.50,1vhilst the regular hours of work range from an eight-hour day and a six-day week to an 113-hour day and a seven-day week. A similar variation in wages and hours was found in New York.

Several Cardiff proprietors whose applications for licences to ply for hire on the route Cardiff-Wenvoe-Barry were turned down during the summer months by the Barry Urban District Council and the Cardiff Watch Committee, have reeleveed their application for permits to the Barry authorities, but without success. The council declines to grant licences on the score of adequacy of present services and the proprietors have intimated their intention of appealing to the Ministry.

An illustration which is published on this page shows an incident during a recent visit of the well-known directors of Harris and Hasell, Ltd., the concessionnaires for Reo vehicles in Great Britain, to the Reo factory at Lansing, U.S.A. In the picture Mr. W. Cross is seen at the wheel, beside him being seated Mr. C. C. Harris, whilst Mr. Martin Gamble is standing behind them.

The vehicle on which they are fo be seen is a model II Rea, and is the first commercial vehicle produced by the company.. It was built in 1910 and has a carrying capacity of 1,500 lb. It has a single-cylinder engine of 41-in, bore and 6-in, stroke, and is rated at 9 h.p. It is provided with two forward speeds and a reverse, with a single chain drive from the gearbox to the differential or jack shaft, and with two chains thence to the rear axle. The rear wheels are of 42 ins. diameter and have 2-in, solid rubber treads. The changes of speed are effected by a lever, the forward motion of Which engages high speed and the backward movement of which engages lose gear.