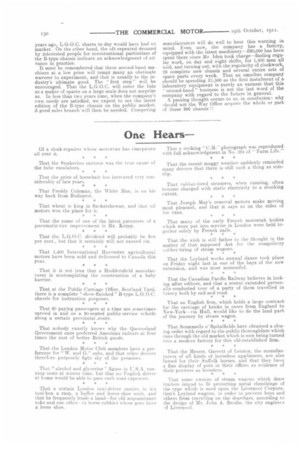 Page 2, 19th October 1911 — One Hears
Close
Noticed an error?
If you've noticed an error in this article please click here to report it so we can fix it.
Keywords : Steam Wagon, Scammell, Karrier, Carriage, Leiston, Wagon, Rail Transport

That the Snakerloo cartoon was the true cause of

That the price of horsehair has increased very con siderably of late years.

That Freddy Coleman, the White Man, is on his

way back from Budapest.

That wheat is king in Saskatchewan, and that. oil motors won the place for it.

That the name of one of the latest patentees of a pneumatic-tire improvement is Mr. Knipp.

That the L.G.O.C. dividend will probably be five per cent., but that it certainly will not exceed six.

That 1,400 International Harvester agricultural motors have been sold and delivered to Canada this year.

That it is not true that a Huddersfield manufac turer is contemplating the construction of a baby karrier.

That at the Public Carriage Office, Scotland Yard, there is a complete "show-finished" B-type L.G.O.C,

That 60 paying passengers at a time are sometimes carried in and on a 20-seated public-service vehicle along a certain provincial .route.

That nobody exactly knows why the Queensland Government once preferred American railcars at four times the cost of better British goods.

That the London Motor Club members have a preference for "W. and G." cabs, and that other drivers therefore purposely fight shy of the premises.

That "alcohol and glycerine" figure in L.S.A. running costs at winter time, but that no English driver at home would be able to pass such road expenses.

That a certain London taxi-driver carries in his tool-box a rasp, a buffer and horse-shoe nails, and that he frequently lends a hand—for old acquaintance sake.an.d one other—to horse cabbies whose gees have a loose shoe. That a striking " C.M." photograph was reproduced with full acknowledgment in No. 324 of " Farm Life!'

That the recent muggy weather suddenly reminded many drivers that there is still such a thing as sideslip.

That rubber-tired steamers, when running, often become charged with static electricity to a shocking extent..

That Joseph May's removal motors make moving most pleasant, and that it. says so on the sides of his vans.

That many of the early French motorcab bodies which were put into service in London were held to gether solely by French nails. * * That the wish is still father to the thought in the matter of that supposed -Act for the compulsory

That the Leyland works annual dance took place on Friday night last in one of the bays of the new extension, and was most successful.

That the Canadian Pacific Railway believes in looking after editors, and that a recent extended personally-conducted tour of a party of them travelled in luxury both by rail and road.

That an English firm, which holds a large contract for the carriage of bricks in cases from England to New-York—via Hull, would like to do the land part of the journey by steam wagon.

That Scammells o' Spitalfields have obtained a closing order with regard to the public thoroughfare which runs through the old market which is now being turned into a modern factory for this old-established firm.

That the Messrs. Garrett of Leiston, the manufacturers of all kinds of horseless appliances, are also famed for their Suffolk horses, and that they have a fine display of pots in their offices as evidence of their prowess as breeders.

That some owners of steam wagons which draw trailers intcnd to fit protecting metal sheathings of the type which is used upon the Liverpool Corporation's Leyland wagons, in order to prevent boys and others from travelling on the drawbars, according to the design of Mr. John A. Brodie, the city engineer of Liverpool.