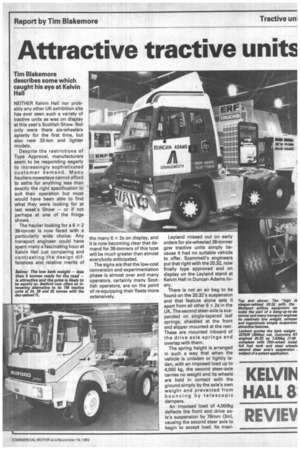 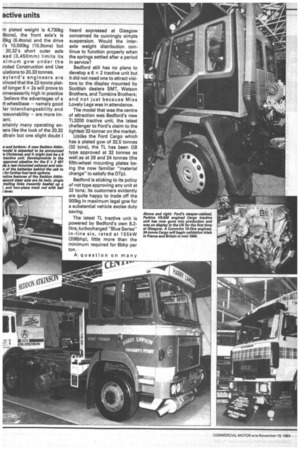 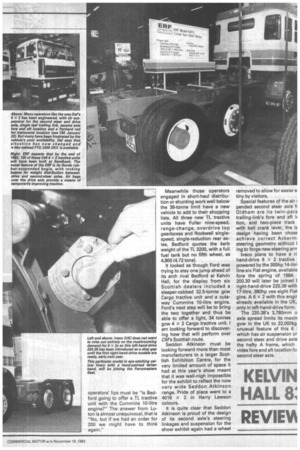 Tim Blakemore describes some which caught his eye at Kelvin Hall

NEITHER Kelvin Hall nor probably any other UK exhibition site has ever seen such a variety of tractive units as was on display at this year's Scottish Show. Not only were there six-wheelers aplenty for the first time, but also new 32-ton and lighter models.

Despite the restrictions of Type Approval, manufacturers seem to be responding eagerly to increasingly sophisticated customer demand. Many hauliers nowadays cannot afford to settle for anything less than exactly the right specification to suit their operation but most would have been able to find what they were looking for at last week's Show or if not perhaps at one of the fringe shows.

The haulier looking for a 6 x 2 38-tonner is now faced with a particularly wide choice. Any transport engineer could have spent many a fascinating hour at Kelvin Hall just comparing and contrasting the design differences and relative merits of the many 6 x 2s on display, and it is now becoming clear that demand for 38-tonners of this type will be much greater than almost everybody anticipated.

The signs are that the low-cost conversion and experimentation phase is almost over and many operators, certainly many Scottish operators, are on the point of re-equipping their fleets more extensively. Leyland missed out on early orders for six-wheeled 38-tonner gcw tractive units simply because it had no suitable vehicle to offer. Scammell's engineers put that right with the 20.32, now finally type approved and on display on the Leyland stand at Kelvin Hall in Duncan Adams livery.

There is not an air bag to be found on the 20.32's suspension and that feature alone sets it apart from all other 6 x 2s in the UK. The second steer-axle is suspended on single-tapered leaf springs, shackled at the front and slipper mounted at the rear. These are mounted inboard of the drive axle springs and overlap with them.

The spring height is arranged in such a way that when the vehicle is unladen or lightly laden, with an imposed load up to 4,000 kg, the second steer-axle carries no weight and its wheels are held in contact with the ground simply by the axle's own weight and prevented from bouncing by telescopic dampers.

An imposed load of 4,000kg deflects the front and drive axle's suspension by 76mm (3in), causing the second steer axle to begin to accept load. Its maxi

eyland's engineers are vinced that the 22-tonne platof longer 6 x 2s will prove to innecessarily high in practice believe the advantages of a rt wheelbase — namely good ler interchangeability and loeuvrability — are more imrant.

ertainly many operating en)ers like the look of the 20.32 dtrain but one slight doubt I heard expressed at Glasgow concerned its cunningly simple suspension. Would the interaxle weight distribution continue to function properly when the springs settled after a period in service?

Bedford still has no plans to develop a 6 x 2 tractive unit but it did not need one to attract visitors to the display mounted by Scottish dealers SMT, Watson Brothers, and Tomkins Brothers; and not just because Miss Lovely Legs was in attendance.

The model that was the centre of attraction was Bedford's new TL3200 tractive unit, the latest challenger to Ford's claim to the lightest 32-tonner on the market.

Unlike the Ford Cargo which has a plated gcw of 32.5 tonnes (32 tons), the TL has been GB type approved at 32 tonnes as well as at 28 and 24 tonnes (the fifth-wheel mounting plates being the now familiar "material change" to satisfy the DTp).

Bedford is sticking to its policy of not type approving any unit at 32 tons; its customers evidently are quite happy to trade off the 500kg in maximum legal gcw for a substantial vehicle excise duty saving.

The latest TL tractive unit is powered by Bedford's own 8.2litre, turbocharged "Blue Series" in-line six, rated at 1 55kW (208bhp), little more than the minimum required for 6bhp per ton.

A question on many operators' lips must be "Is Bedford going to offer a TL tractive unit with the Cummins 10-litre engine?" The answer from Luton is almost unequivocal, that is "No, but if we had an order for 200 we might have to think again." Meanwhile those operators engaged in short-haul distribution or shunting work well below the 38-tonne limit have a new vehicle to add to their shopping lists. All three new TL tractive units have Fuller nine-speed, range-change, overdrive top gearboxes and Rockwell singlespeed, single-reduction rear axles. Bedford quotes the kerb weight of the TL 3200, with a full fuel tank but no fifth wheel, as 4,800 (4.72 tons).

It looked as though Ford was trying to stay one jump ahead of its arch rival Bedford at Kelvin Hall, for the display from six Scottish dealers included a sleeper-cabbed 32.5-tonne gcw Cargo tractive unit and a cutaway Cummins 10-litre engine. Ford's next step will be to bring the two together and thus be able to offer a light, 34 tonnes gcw 4 x 2 Cargo tractive unit. I am looking forward to discovering how that will perform over CM'S Scottish route.

Seddon Atkinson must be looking forward more than most manufacturers to a larger Scottish Exhibition Centre, for the very limited amount of space it had at this year's show meant that it was well-nigh impossible for the exhibit to reflect the now very wide Seddon Atkinson range. Pride of place went to a 4016 x 2 in Harry Lawson colours.

It is quite clear that Seddon Atkinson is proud of the design of its second axle's steering linkages and suspension for the show exhibit again had a wheel removed to allow for easier s tiny by visitors.

Special features of the air pended second steer axle fi Oldham are its twin-para trailing-link's fore and aft I( tion, and two-piece track with bell crank lever, the IE design having been chose achieve correct Ackermi steering geometry without I ing to forge new steering arn Iveco plans to have a ri hand-drive 6 X 2 tractive powered by the 300hp 14-litri line-six Fiat engine, available fore the spring of 1984. 200.30 will later be joined t right-hand-drive 220.38 with 17-litre, 380hp vee eight Fiat gine. A 6 x 2 with this engir already available in the UK, only in left-hand-drive form,

The 220.38's 3,780mm o axle spread limits its maxin gvw in the UK to 22,000kg unusual feature of this 6 : which has air suspension or second steer and drive axle the hefty A frame, which vides fore and aft location fol second steer axle.