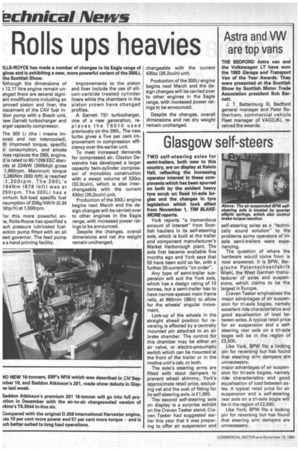 TWO self-steering axles for semi-trailers, both new to this country, are on display at Kelvin Hall, reflecting the increasing operator interest in these components which has been spurred on both by the evident heavy tyre scrub on fixed tri-axle bogies and the changes in tyre legislation which took effect from November 1, TIM BLAKEMORE reports.

York reports "a tremendous amount of interest" from Scottish hauliers in its self-steering axle, which is built at the trailer and component manufacturer's Market Harborough plant. The axle first became available five months ago and York says that 50 have been sold so far, with a further 20 currently "on order".

Any type of semi-trailer suspension will suit the York axle, which has a design rating of 10 tonnes, but a semi-trailer has to have narrow-spaced main frame rails, at 965mm (38in) to allow for the wheels' angular movement.

Lock-up of the wheels in the straight ahead position for reversing is effected by a centrally mounted pin attached to an air brake chamber. The control for this chamber may be either an air valve, or electro-pneumatic switch which can be mounted at the front of the trailer or in the motive unit's cab, or both.

The axle's steering arms are fitted with stout dampers to prevent wheel shimmy. York's approximate retail price, excluding vat and the cost of fitting for its self-steering axle, is £1,000.

The question of where the hardware would come from is now answered. It is BPW, Ber gische Patentachsenfabrik Wiehl, the West German manu facturer of axles and suspensions, which claims to be the largest in Europe.

Craven Tasker emphasises the major advantages of air suspen sion for tri-axle bogies, namely excellent ride characteristics and good equalisation of load be tween axles. A typical retail price for air suspension and a selfsteering rear axle on a tri-axle bogie will be in the region of £2,500.

Like York, BPW fits a locking pin for reversing but has found that steering arm dampers are unnecessary.

Like York, BPW fits a locking pin for reversing but has found that steering arm dampers are unnecessary.