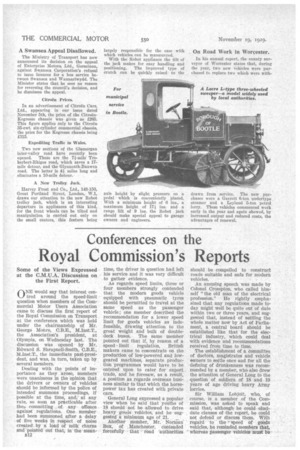 Page 46, 19th November 1929 — A Swansea Appeal Disallowed.
Close
Noticed an error?
If you've noticed an error in this article please click here to report it so we can fix it.

The Ministry of Transport has now announced its decision on the appeal of Enterprise Motors, Ltd., Gorseinon, against Swansea Corporation's refusal to issue licences for a bus service between Swansea and Waunarlwydd. The Minister states that he sees no reason for reversing the council's decision, and he dismisses the appeal.

In an advertisement of Citroen Cars, Ltd., appearing in our issue dated November 5th, the price of the Citroenliegresse chassis was given as 1265. This figure applies only to the Citroen 35-cwt. six-cylinder commercial chassis, the price for the Kegresse chassis being £315.

Two new sections of the Glamorgan inter-valley road have recently been opened. These are the 7k-mile Treherbert-Rhigos road, which saves a 17mile detour, and the Glynneath-Banwen road. The latter is 4i miles long and eliminates a 10-mile detour.

Harvey Frost and Co., Ltd., 148-150, Great Portland Street, London, • W.1, draws our attention to the new Robot trolley jack, which is an interesting departure in appliances of this kind, for the front wheels can be tilted and manipulation is carried out only on the small castors, this feature being largely responsible for the ease with which vehicles can be manceuvred.

With the Robot appliance the tilt of the jack makes for easy handling and positioning. The improved type of crutch can be quickly raised to the axle height by slight pressure on a pedal which is conveniently Placed. With a minimum height of 6 ins., a maximum height of 17i ins, and a range lift of 9 ins. the Robot jack should make special appeal to garage owners and engineers. In his annual report, the county surveyor of Worcester states that, during the year, two new vehicles were purchased to replace two which were with.

drawn from service. The new purchases were a Garrett 6-ton undertype steamer and a Leyland 5-ton petrol lorry. These vehicles commenced work early in the year and again showed, by increased output and reduced costs, the advantages of renewal.