Shades of a 17th century struggle 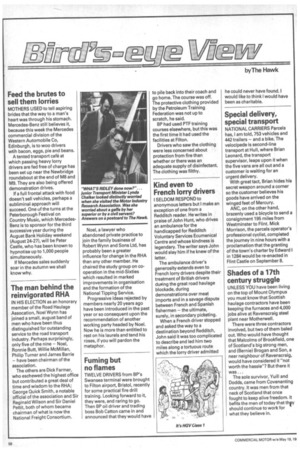 Page 76, 19th May 1984 — Shades of a 17th century struggle
Close
Noticed an error?
If you've noticed an error in this article please click here to report it so we can fix it.
Keywords : Motherwell, Ravenscraig, Ss Ravenscrag, Brookfield, Massachusetts

UNLESS YOU have been living on the top of Mount Olympus you must know that Scottish haulage contractors have been keeping the furnaces and 4,000 jobs alive at Ravenscraig steel plant near Motherwell.

There were three contractors involved, but two of them baled out. Who would have thought that Malcolms of Brookfield, one of Scotland's big strong men, and (Bernie) Brogan and Son, a near neighbour of Ravenscraig, would have considered it "not worth the hassle"? But there it was ...

The sole survivor, Yuill and Dodds, came from Covenanting country. It was men from that neck of Scotland that once fought to keep alive freedom. It befits the men of today that thgy should continue to work for what they believe in.