FRENCH and Spanish lorry owners who continue to send overloaded 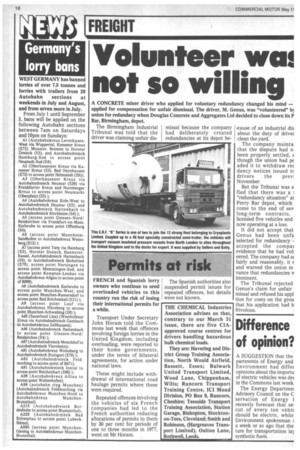 Page 20, 19th May 1978 — FRENCH and Spanish lorry owners who continue to send overloaded
Close
Noticed an error?
If you've noticed an error in this article please click here to report it so we can fix it.
Keywords : Truck, Lorry

vehicles to this country run the risk of losing their international permits for a while.

Transport Under Secretary John Horam told the Commons last week that offences involving foreign lorries in the United Kingdom, including overloading, were reported to their home governments, under the terms of bilateral agreements, for action under national laws.

These might include withdrawal of international road haulage permits where these were required.

Repeated offences involving the vehicles of six French companies had led to the French authorities reducing allocations of permits to them by 30 per cent for periods of one to three months in 1977, went on Mr Horarn. The Spanish authorities also suspended permit issues for repeated offences, but details were not known.