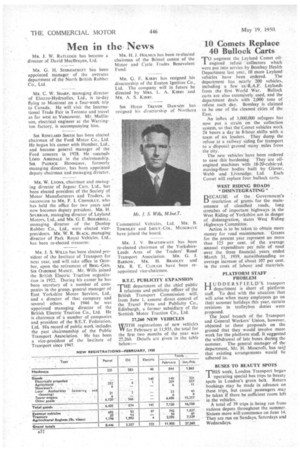 Page 34, 19th May 1950 — Men in the News
Close
Noticed an error?
If you've noticed an error in this article please click here to report it so we can fix it.
Keywords : Politics

MR, G. H. STONES! REET has been appointed manager of the overseas department of the North British Rubber Co., Ltd.

MR. C. W. SHARP. managing director of Electro-Hydrattlies. Ltd., is to-day flying to Montreal on a four-week trip to Canada. He will visit the International Trade Fair in Toronto and travel as far west as Vancouver. Mr. Mallinson, electrical engineer at the Warrington factory, is accompanying him.

SIR ROWLAbID Small has been elected chairman of the Ford Motor Co., Ltd. He began his career with Humber, Ltd., and became general manager of the Ford concern in 1928. lie succeed. LORD AIREDALE in the chairmanship. SIR PATRICK FIENNESt•W. formerly managing director, has been appointed deputy chairman and managing director.

has been re-elected treasurer. _

Ma. J. S. WILLS has been elected president of the Institute of Transport for next year, and will take office in October, upon the retirement of BRIG.-GEN. SIR OSBORNE MANCE. Mr. Wills joined the British Electric Traction organization in 1922. During his career he has been secretary of a number of companies in the group, general manager of East Yorkshire Motor Services, Ltd.. and a director of that company and several others. In 1946 he was appointed managing director of the British Electric Traction Co., Ltd. He is chairman of a number of companies and president of the R.E.T. Federation. Ltd. His record of public work includes the past chairmanship of the Public Transport Association. He has been a vice-president of the Institute of Transport since 1947. MR. H. J. HOLMES has been re-elected chairman of the Bristol centre of the Motor and Cycle Trades Benevolent Fund.

MR. G. E. KIRBY has resigned his directorship of the Euston Ignition Co., Ltd. The company will in future be directed by Mits. L. A. KIRBY and MR, A. S. KIRBY.

SIR HUGH TREVOR DAWSON has resigned his directorship of Northern Commercial Vehicles, Ltd, MR. B. TOWNLEY and LIEDT.-CoL. MusGRAvE have joined the board.

THE department of the chief public relations and publicity officer of the British Transport Commission will. from June I. assume direct control of the Travel Press and Publicity Co., Edinburgh. a former subsidiary of the Scottish Motor Traction Co., Ltd.

27,260 NEW VEHICLES WITH registrations of new vehicles IfT for February at 11,935, the total for the first two months of the year was 27,260. Details are given in the table below:—