CONGRESS OF THE INSTITUTE OF TRANSPORT. 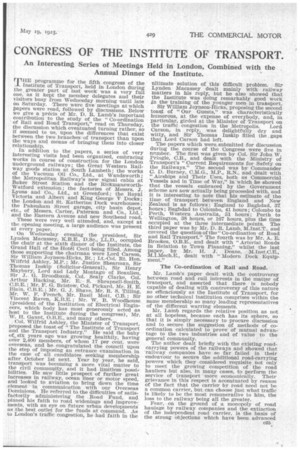 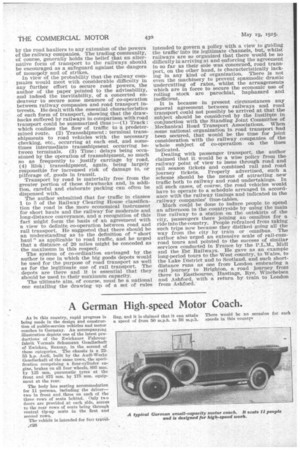 Page 9, 19th May 1925 — CONGRESS OF THE INSTITUTE OF TRANSPORT.
Close
Noticed an error?
If you've noticed an error in this article please click here to report it so we can fix it.
Keywords : Rail Transport, Rail Transport In Great Britain, London, Midland And Scottish Railway

An Interesting Series of Meetings Held in London, Combined with the Annual Dinner of the Institute.

rpHE programme for the fifth congress of the -L Institute of Transport, held in London during the greater part of last week was a very full one, as it kept the member delegates and their visitors busy from Wednesday morning until late on Saturday. There were five• meetings at which papers were read, followed by discussions. Below we give a precis of Mr. D. It. Lamb's important contribution to the study of the " Co-ordination of Rail and Road Transport," read on Thursday, the discussion which eventuated turning rather, so it seemed to us, upon the differences that exist between the two branches of transport than upon the ways and means of bringing them into closer relationship. In addition to the papers, a series of very interesting visits had been organized, embracing works in course of construction for the London underground railways ; the Great Western Railway goods station at South Lambeth ; the works of the Vacuum Oil Co., Ltd., at Wandsworth; the Metropolitan Railway's new signal cabin at Baker Street Station and the RickmansworthWatford extension; the factories of Messrs. J. Lyons and Co. Ltd., at Greenford; the Royal Victoria and Albert and King George V Docks ; the London and St. Katherine Dock warehouses ; the Pakenham Street garage, city basin depot, etc., of Messrs. Carter, Paterson and Co., Ltd.; and the Eastern Avenue and new Southend road.

These were very well attended, and, except at the opening meeting, a large audience was present at every paper.

On Wednesday evening the president, Sir Lynden Macassey, K.B.E., D.Sc., LL.D., occupied the chair at the sixth dinner of the Institute, the Grand Hall of the Hotel Cecil being filled. Among those supporting the chairman were Lord Carson, Sir William Joynson-Hicks, Bt.; Lt.-Col. Rt. Hon. Wilfrid Ashley, M.P.; Mr. Justice Shearman, Sir Thomas Inskip (Solicitor-General), Sir Henry "Maybury, Lord and Lady Montagu of Beaulieu, Sir J. G. Broodbank, Col. Sealy Clarke, Col. Arthur Hacking, Mr. E. S. Shrapnell-Smith, C.B.E. ; Mr. F. G. Bristow, Col. Pickard, Mr. H. E. Blain, C.B.E. ; Mr. G. J. Shave, Mr. R. S. Tilling, Mr. W. F. French, Mr. Basil Mott, C.B. • Sir Vincent Raven, K.B.E.; Mr. W. B. Woodhouse (president of the Institution of Electrical Engineers, which body has most generously acted as host to the Institute during the congress), Mr. IV. H. Gaunt, 0.B.E., and many others. Col. Wilfrid Ashley, the Minister of Transport, proposed the toast-of The Institute of Transport and the Transport Industry." He said the baby of, six years ago was growing healthily, having over 2,400 members, of whom 17 per cent. were overseas, and he congratulated the council upon the step of imposing an entrance examination in the case of all candidates seeking membership after October 1st next. Year by year, he said, transport was becoming a more vital matter to the civil community, and it had limitless possibilities. He saw little prospect of further great increases in railway, ocean liner or motor speed, and looked to aviation to bring down the time element in communication with our Overseas Dominions. He referred to the difficulties of satisfactorily administering the Road Fund, and pinned his faith to road widenings and improvemerits, with an eye on future urban developments as the best outlet for the funds at command. As to London's traffic congestion, he had faith in the ultimate solution of this difficult problem. Sir Lynden Macassey dealt mainly with railway matters in his reply, but he also showed that the Institute was doing remarkably good work In the training of the younger men in transport.

Sir William Joynson-Hicks, proposing the second toast of "Our Guests," was characteristically humorous, at the expense of everybody, and, in particular, girded at the Minister of Transport on the traffic congestion in the Metropolis. Lord Carson, in reply, was delightfully dry and witty, and Sir Thomas Inskip filled the gaps that Lord Carson had left.

The papers which were submitted for discussion during the course of the Congress were five in number. The first was given by Col. Sir John W. Pringle, C.B., and dealt with the Ministry of Transport's "Current Requirements for Safety on the Railways." The second was by Commander C. D. Burney, C.M.G., M.P., R.N., and dealt with "Airships and Their Uses, both as Commercial Vessels and in Time of War," in which he showed that the vessels embraced by the Government scheme are now actually being proceeded with, and it is interesting to note that his estimate of the time of transport between England and New Zealand is as follows: England to Baghdad, 37, hours; Baghdad to Colombo, 41 hours ; Colombo to Perth, Western Australia, 51 hours ; Perth to Wellington, 38 hours, or 167 hours, plus the time occupied at the three intermediate points. The third paper was by Mr. D. R. Lamb, M.Inst.T., and covered the question of the" Co-ordination of Road and Rail Transport." The fourth was by Mr. A. E. Brookes, 0.B.E., and dealt with "Arterial Roads in Relation to Town Planning," whilst the last paper, by Mr. H. 3. Deane, M.Inst.C.E., M.I.Mech.E., dealt with "Modern Dock Equipment."

The Co-ordination of Rail and Road.

Mr. Lamb's paper dealt with the controversy between road and rail interests in the matter of transport, and asserted that there is nobody capable of dealing with controversy of this nature so efficaciously as the Institute of Transport, for no other technical institution comprises within the same membership so many leading representatives of the different warring elements.

Mr. Lamb regards the relative position as not at all hopeless, because each has its sphere, so that it is simply necessary to procure discussion and to secure the suggestion of methods of coordination calculatedto prove of mutual advantage to the two industries and of value to the general community. The author dealt briefly with the existing roadcarrying powers of the railways and showed that 'railway companies have so far failed in their endeavour to secure the additional road-carrying powers which they considered requisite not only to meet the growing competition of the road hauliers but also, in many cases, to perform the service of transport more economically. Their grievance in this respect is accentuated by reason of the fact that the carrier by road need not be a common carrier, but can choose just what traffic is likely to be the most remunerative to him, the loss to the railway being all the greater.

Fear, on the ground of a monopoly of road haulage by railway companies and the extinction of the independent road carrier, is the basis of the strong objections which have been advanced 025. by the road hauliers to any extension of the powers of the railway companies. The trading community, of course, generally holds the belief that an alternative form of transport to the railways should be encouraged as a safeguard against the dangers of monopoly and of strikes.

In view of the probability that the railway companies would meet with considerable difficulty in any further effort to secure road powers, the author of the paper pointed to the advisability, and indeed the inevitability, of a concerted endeavour to secure some measure of co-operation between railway companies and road transport interests. He dealt with the essential characteristics of each form of transport, showing that the drawbacks suffered by railways in comparison with road transport could be summarized thus :—(1) Track : which confines the flow of traffic to a predetermined route. (2) Transshipment : terminal transshipments to road vehicles with the necessary checking, etc., occurring at each end, and sometimes intermediate transshipment occurring between terminals. (3) Time: delays being occasioned by the operation of transshipment, so much so as frequently to justify carriage by road. (4) Risk : transshipment, again, being largely responsible for increased risk of damage to, or pilferage of, goods in transit.

Transport by road is materially free from the greater portion of these drawbacks and, in addition, careful and elaborate packing can often be dispensed with.

The author submitted that for traffic in classes I to 5 of the Railway Clearing House classification the road is the more economical instrument for short hauls and the railway for moderate and Jong-distance conveyance, and a recognition of this fact might form the basis of an agreement with a view to definite co-operation between road and rail transport. He suggested that there should be an understanding as to the definition of "short haul" as applicable to road traffic, and he urged that a distance of 20 miles might be conceded as the maximum in this respect. The system of co-ordination envisaged by the author Is one in which the big goods depots would be used for the purpose of road transport as well as for the legitimate one of rail transport. The depots are there and it is essential that they should be used to their maximum capacity.

The ultimate aim, of course, must be a national one entailing the drawing up of a set of rules intended to govern a policy with a view to guiding the traffic' into its legitimate channels, but, whilst railways are so organized that there would be no difficulty in arriving at and enforcing the agreement in so far as their side was concerned, road transport, on the other hand, is characteristically lacking in any kind of organization. There is not even the machinery to prevent spasmodic drastic undercutting of rates, whilst the arrangements which are in force to secure the economic use of rolling stock are parochial, haphazard and inefficient.

It is because in present circumstances any general agreement between railways and road transport could not possibly be arrived at that the subject should be considered by the Institute in conjunction with the Standing Joint Committee of Mechanical Road Transport Associations. When some national organization in road transport had been secured, that would be the time for joint consideration with the railway companies of the whole subject of co-operation on the lines indicated, Dealing with passenger transport, the author claimed that it_ would be a wise policy from the railway point of view to issue through road and rail season tickets and combined rail and road journey tickets. Properly advertised, such a scheme should be the means of attracting new traffic both to railway and road undertakings. In all such cases, of course, the road vehicles would have to operate to a schedule arranged in accordance with the railway timings and indicated in the railway companies' time-tables. Much could be done to induce people to spend an afternoon in the countryside by using the main line railway to a station on the outskirts of the city, passengers there joining an omnibus for a ride into the country. People refrained from taking such trips now because they disliked going all the way from the city by train or omnibus. The author also urged an extensive scale of rail-cumroad tours and pointed to the success of similar services conducted in France by the P.L.M., Midi and the Est Railways. He gave as an example long-period tours to the West country, to Wales, to the Lake District and to Scotland. and such shortdistance runs as one from London embracing a rail journey to Brighton, a road journey from there to Eastbourne, Hastings, Rye, Winchelsea and Ashford, with a return by train to London from Ashford,'