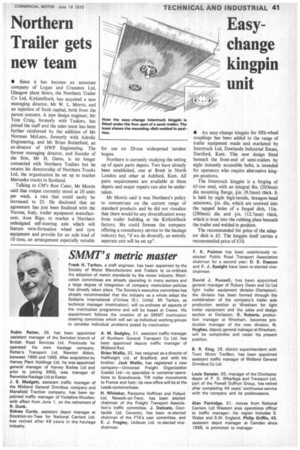 Frank H. Tarlton, a staff engineer, has been appointed by the Society of Motor Manufacturers and Traders to co-ordinate the adoption of metric standards by the motor industry. Metrication committees are already operating in many sectors and a large degree of integration of company metrication policies has already taken place. The Society's executive committee has already recommended that the industry as a whole adopt the Systems International d'Unites (S.I. Units). Mr Tarlton, as technical manager (metrication), will co-ordinate all aspects of the metrication programme and will be based at Crewe. His appointment follows the creation of an SMMT metrication steering committee which will set up individual working groups to consider individual problems posed by metrication.

Robin Retter, 36, has been appointed assistant manager of the Swindon branch of British Road Services Ltd. Previously he operated his own haulage company, Retter's Transport Ltd, Newton Abbot, between 1960 and 1965. After acquisition by Harvey Plant Holdings Ltd, he was appointed general manager of Harvey Bodies Ltd and prior to joining BRSL was manager of Renwicks Haulage Ltd at Exeter.

Brian Wallis. 32, has resigned as a director of Hallfreight Ltd, of Bradford, and with his brother, Jack Wallis, has registered a new company—Universal Freight Organization (Leeds) Ltd—to specialize in container operations to Scandinavia, TIR trailer movements to France and Italy: its new office will be at the Leeds containerbase.

David J. Russell, has been appointed general manager of Rubery Owen and Co Ltd light trailer equipment division (Darlaston): the division has been formed through the combination of the company's trailer axle production section at Wrexham for light trailer equipment and the sales and design section at Darlaston. D. Roberts, production manager at Wrexham. becomes production manager of the new division, H. Hughes, deputy general manager at Wrexham, will be comptroller and retain his present position.

Louis Sensier, 65, manager of the Chichester depot of P. D. Wharfage and Transport Ltd, part of the Powell Duffryn Group, has retired after completing 44 years' continuous service with the company and its predecessors.