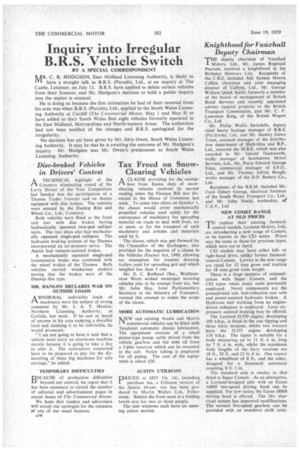 Page 16, 19th June 1959 — Inquiry into Irregular B.R.S. Vehicle Switch
Close
Noticed an error?
If you've noticed an error in this article please click here to report it so we can fix it.
Keywords : Brakes, Disc Brake, Railway Brake, Hodgson, Coventry

BY A SPECIAL CORRESPONDENT MR. C. R. HODGSON, East Midland Licensing Authority, is likely to have a straight talk to B.R.S. (Parcels), Ltd., at an inquiry it The Castle, Leicester, on July 13. B.R.S. have applied to delete certain vehicles from their licences, and Mr. Hodgson's decision to hold a public inquiry into the matter is unusual.

He is doing so because the first intimation he had of their removal from his area was when B.R.S. (Parcels), Ltd., applied to the South Wales Licensing Authority at Cardiff (The Commercial Motor, May 1 and May 8) to have added to their South Wales fleet eight vehicles formerly operated in the East Midland, Metropolitan and North-western Areas. The authorities had not been notified of the changes and B.R.S. apologized for the irregularity.

Coventry eliminating round of the Lorry Driver of the Year Competition last Sunday was the participation of a Thames Trader 3-tonner and an Austin equipped with disc brakes. The vehicles were entered by the Dunlop Rim and Wheel Co., Ltd., Coventry.

Both vehicles were fitted at the front and rear with disc brakes having hydraulically operated twin-pad calliper units. The rear discs also had mechanically operated single-pad callipers. The hydraulic braking systems of the Thames incorporated an air-pressure servo. The Austin had vacuum-assisted brakes.

A mechanically operated single-pad transmission brake was combined with the wheel brakes of the Thames. Both vehicles carried windscreen stickers stating that the brakes were of the Dunlop disc type.

A BNORMAL indivisible loads of r machinery were the subject of strong comment by Mr. J. A. T. Hanlon, Northern Licensing Authority, at Carlisle, last week. If he saw or heard of anyone in his area carrying a divisible load and claiming it to be indivisible, he would prosecute.

"I am not going to have it said that a vehicle must carry an enormous machine merely because it is going to take a day, to alter it. The contractors concerned have to be prepared to pay for the dismantling of these big machines for safe carriage," he added.

pECAUSE of production difficulties beyond our control, we regret that it has been necessary to curtail the number of editorial and advertisement pages in recent issues of The Commercial Motor. We hope that readers and advertisers will accept our apologies for the omission of any of our usual features.