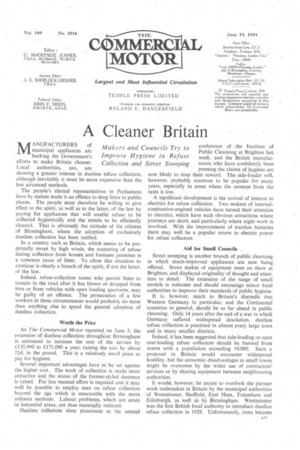 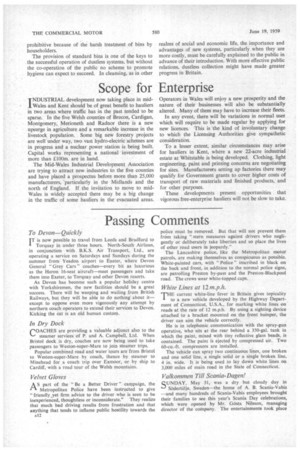 Page 13, 19th June 1959 — A Cleaner Britain
Close
Noticed an error?
If you've noticed an error in this article please click here to report it so we can fix it.

MANUFACTURERS of municipal appliances are backing the Government's efforts to make Britain cleaner. Local authorities, too, are showing a greater interest in dustless refuse collection, although inevitably it must be more expensive than the less advanced methods.

The people's elected representatives in Parliament have by statute made it an offence to drop litter in public places. The people must therefore be willing to give effect to the spirit, as well as to the letter, of the law by paying for appliances that will enable refuse to be collected hygienically and the streets .to be efficiently cleaned. That is obviously the attitude of the citizens of Birmingham, where the adoption of exclusively dustless collection has been ratified.

In a country such as Britain, which seems to be perpetually swept by high winds, the scattering of refuse during collection from houses and business premises is a common cause of litter. To allow this situation to continue is clearly a breach of the spirit, if not the letter, of the law.

Indeed, refuse-collection teams who permit litter to remain in the road after it has blown or dropped from bins or from vehicles with open loading apertures, may be guilty of an offence. The prosecution of a few workers in these circumstances would probably do more than anything else to speed the general adoption of dustless Collection.

Worth the Price As The Commercial Motor reported on June 5, the extension of dustless cblIection throughout Birmingham is estimated to increase the cost of the service by £135,990 to £171,090 a year, raising the rate by about 2.kl. in the pound. This is a relatively, small price to pay for hygiene.

Several important advantages, have to be set against the higher cost. The work of collection is made more attractive and the status of the former-styled dustman is raised. Far less manual effort 'is required and it may well be possible to enaploy men on refuse collection beyond the age which is reasonable with the more arduous methods. Labour problems, which are .acute in industrial areas, are thus materially reduced.

Dustless Collectors were prominent at the annual conference of the Institute of Public Cleansing at Brighton last week, and the British manufacturers Who have confidently been pressing the claims of hygiene are now likely to reap their reward. The side-loader will, however, probably continue to be popular for many years, especially in areas where the revenue from the rates is low.

A significant development is the revival of interest in electrics for refuse collection. Two makers of internalcombustion-engined vehicles have turned their attention to electrics, which have such obvious attractions where journeys are short, and particularly where night work is involved. With the improvement of traction batteries there may well be a popular return to electric poper for refuse collectors.

Aid for Small Councils Street sweeping is another branch of public cleansing in which much-improved appliances are now being offered. Seven makes of equipment were on show at Brighton, and displayed originality of thought and attention to detail. The extension of the range of small models is welcome and should encourage minor local authorities to improve their standards of public hygiene.

It is, however, much to Britain's discredit that Western Germany in particular, and the Continental countries in general, should be so far ahead in public cleansing. Only 14 years after the end of a war in which Germany suffered widespread desolation, dustless refuse collection is practised in almost every large town and in many smaller districts.

Indeed, it has been suggested that side-loading or open rear-loading refuse collectors should be banned from towns with a population exceeding 10,000. Such a proposal in Britain would encounter widespread hostility, but the economic disadvantages in small towns might be overcome by the wider use of contractors' services or by sharing equipment between neighbouring authorities.

It would, however, be unjust to overlook the pioneer work undertaken in Britain by the municipal authorities 'of Westminster, Sheffield, East Ham, Tottenham and Edinburgh, as well as by Birmingham. Westminster was the first British local authority to introduce dustless refuse collection in 1928. Unfortunately, costs became prohibitive because of the harsh treatment of bins by householders.

The provision of standard bins is one of the keys to the successful operation of dustless systems, but without the co-operation of the public no scheme to promote hygiene can expect to succeed. In cleansing, as in other realms of social and economic life, the importance and advantages of new systems, particularly when they are more costly, must be carefully explained to the public in advance of their introduction. With more effective public relations, dustless collection might have made greater progress in Britain.